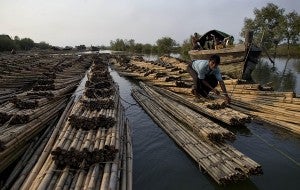 YANGON—Myanmar’s economy expanded 6.5 percent last year and is set for further modest acceleration, the IMF estimated Wednesday, as sweeping reforms herald hopes of a renaissance for the impoverished nation.

At the end of a mission to the fast-changing nation, the International Monetary Fund predicted the economy would grow 6.75 percent in the 2013/2014 financial year, driven by gas production and investment.

He said increasing foreign direct investment was expected to outweigh a widening current account deficit, as the former junta-run country opens to the world.

The comments come as President Thein Sein, a general-turned-civilian, visits the United States—the first leader of his country to go there in nearly 50 years as relations are normalized with the world’s largest economy.

The United States, which has already waived most sanctions on Myanmar in reward for reform, on Tuesday signed an accord to formalize dialogue on trade, a day after Thein Sein made a pitch to US business leaders for investment.

Positive developments include exchange rate and investment law reform as well as “significant increases” in tax collection seen as crucial to pay for higher spending on long-neglected sectors like health and education.

Myanmar is seen as having significant frontier market potential, with a large population and a wealth of resources—from oil and gas to timber and agriculture.

But the sheer scale of the changes poses a huge challenge for authorities and institutions in Myanmar, whose isolationist former junta left the once-rich nation’s economy in tatters before ceding power to a quasi-civilian regime two years ago.

Davies said “risks” to the country’s prospects would come from “the limited macroeconomic management capacity, which will be strained by the rapid, broad-based economic transition”.

Inflation is seen as “moderate” at around 5.5 percent in the current year, he said, “but there are pressures, including from money growth, real estate prices and wage increases.”

The IMF, which expects “further progress” on reform this year including a key Central Bank law in the coming months, said it would soon open an office in the country to help give technical assistance and support.