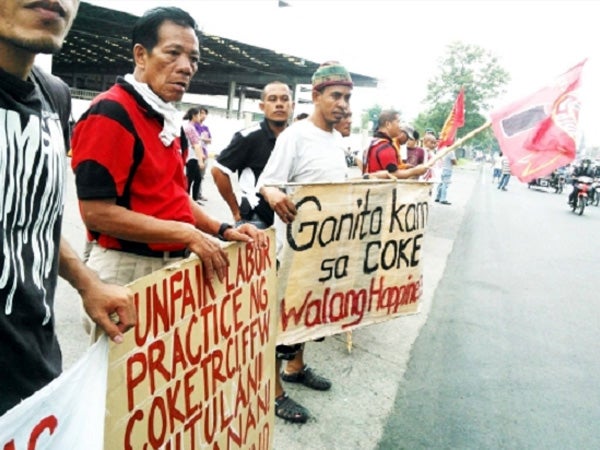 SAN PEDRO, Laguna, Philippines — Some 250 workers, mostly delivery truck drivers, haulers and forklift operators, held their ground outside the bottling plant of the Coca-Cola Bottlers Philippines, Inc. (CCBPI) in Sta. Rosa City, Laguna on  Wednesday to protest what to them were “unfair labor practices.”

The workers, who have been on strike since Monday morning, barricaded four gates of the bottling plant in Barangay (village) Pulong Sta. Cruz, preventing truckloads of Coke products from leaving or entering the plant’s premises.

Despite the issuance of a temporary restraining order (TRO) by the Regional Trial Court in Biñan City, Laguna, protesters refused to stand down. The court issued the injunction in favor of the CCBPI on Tuesday afternoon and ordered the workers to leave and allow the trucks’ ingress and egress.

“But labor issues are no longer within the local court’s jurisdiction (and) should be tackled by Dole (Department of Labor and Employment),” said Avelino Fernando, president of the Unyon ng mga Manggagawang Driver, Forklift Operator, at Picker sa Sta. Rosa CCBPI-Independent.

Dole-Calabarzon (Cavite, Laguna, Batangas, Rizal, Quezon) director Alex Avila on Wednesday said the National Conciliation and Mediation Board (NCMB), an office under the labor department, was specifically “on top of the issue.”

But members of the NCMB refused to comment, citing the court-issued TRO as a reason. NCMB staff Minda dela Cruz said the board held a “conciliation meeting to find a win-win solution.”

The protest stemmed from the “contractualization” of some 430 workers, who, Fernando said, had been with the company for eight to ten years.

He claimed that the workers had been directly hired by the CCBPI until 2010, when they were placed under a contractual status with the The Redsystem Company Inc. (TRCI).

The TRCI is a third-party agency and logistics arm of the CCBPI.

Under the TRCI, “employees’ benefits like rice subsidy and the 13th-month bonuses were all removed,” he said.

Fernando, himself a driver, said they used to receive a fixed monthly wages but the agency started paying them P426 on a per-trip basis only.

“It’s not everyday a driver is sent out on a trip,” he said in a phone interview.

In July 2012, the workers petitioned for a certification election to formalize a union that would represent them in a collective bargaining agreement.

The Calabarzon regional office of the Bureau of Labor Relations ruled in January 2013 that the 430 workers were regular employees, but this decision was reversed just after a month and the case was transferred to the DOLE national office.

The workers filed a notice of strike with the Labor Department in March.

Danilo Pancho of the TRCI, in an email to the Inquirer on Wednesday, said he was in a conciliation meeting at the NCMB to discuss the situation.

CCBPI has 23 production plants, serving around 800,000 customers. In March, the beverage giant announced its plan to close the concentrate plant in Canlubang, in Calamba City, also in Laguna, but said this would not affect the operations of the Sta. Rosa bottling plant. The Sta. Rosa plant makes up the bulk of the company’s operations in the Philippines.

Alma Silverio of the CCBPI said in a telephone interview that the company did not wish to get involved in the employer-employee relationship of the workers, who she said were employed by the TRCI.

Silverio declined to give a statement in behalf of CCBPI and referred questions to the TRCI representative.