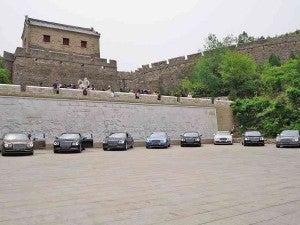 BEIJING—Any cynic will say that a Bentley is such an over-indulgent vehicle to drive through a country with a vast majority of its 1.3 billion population still wallowing well below the poverty line. There is indeed truth to that, as I and my colleagues from Asean were thinking about the night of the unveiling.

But you can’t deny the other facts as well: Every car you see, in Beijing at least, is either a brand new ultra-premium luxury vehicle, or a really old and tatty one. I’d say the split, in Beijing at least, is something like 70:30. From what I’ve seen, 70 percent of all the cars were usually German (think Audi, BMW, Mercedes-Benz luxury sedans or SUVs) while the old, tatty vehicles were mostly Volkswagens (VW being the first German conglomerate to enter the Chinese market in the 1990s). There were surprisingly a handful of Japanese cars, American cars and Korean cars too. But even in this somewhat rarefied field of cars, the Bentley indeed stood out quite prominently, but in a way that doesn’t shout attention unto itself.

What is interesting is that up until only a few hundred years ago, you would not have expected such a flurry of foreigners (both cars and people) in China.

The Forbidden City was home to the Emperor. Emperors ruled over China for over 4 millennia with an iron fist and a steel rod, proclaiming that they have the mandate from heaven to rule the Middle Kingdom, or the kingdom under the heavens living in unimaginable splendor while the rest of China was in extreme poverty. No wonder then that the last Emperor, Pu Yii, died a poor gardener after being dethroned unceremoniously as a child Emperor.

Yet today, communist/socialist China is the world’s fourth biggest economy (counting the days until it becomes THE biggest actually), with millions of millionaires and a growing number of billionaires (India has more billionaires than China supposedly) in  its population. Many Chinese economists feel that the vast workforce of China has slowly started to make the move into middle-income segment earners, allowing them to finally buy decent (if not opulent) homes, cars, the latest tech toys, and take vacations abroad. It is the farmers, those who refuse to leave land and lifestyle, who continue to live in poverty; but surprisingly, they are happy in being self-sufficient.

Bentley sees China as its key growth market. A large number of its vehicles has found their way into China, the Flying Spur in particular being a popular model. So when Bentley announced that it was launching the new Flying Spur  in China to the global media (from United States, Europe, Australia and Africa), everyone was curious, excited and a bit nervous—as we all had to get a Chinese driver’s license. Chinese authorities, to this day, are suspicious of media carrying camera equipment around. Somehow, I can’t imagine fat, slow and lardy me being a James Bond type now, right? 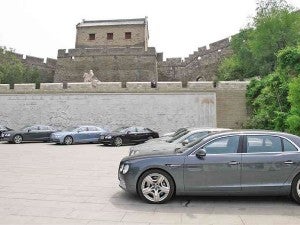 BEIJING and Bentley are enjoying a renaissance at the moment.

But driving in China is an adventure. Outside of Beijing, the roads leading to and from Jinshanling, our lunch stopover and a major bastion of the Great Wall,  are an eclectic mix of expressways, highway, smooth, flowing b-roads and nice secondary dual carriage roads. Surprisingly, practically all the roads we drove on were super smooth and all-new. The expressway network in Beijing rivals that of Germany’s Autobahn.

It was in these roads where I had the opportunity to drive the Bentley as hard and as fast as I dared. The brakes were surprisingly powerful, with no hint of fade. I must admit, it is a leap of faith to trust them when you’re hustling about in a 2.5-ton palace on wheels on narrow mountain roads, similar to a typical farm-to-market road in the Philippines. The suspension really kept body roll in check when I was sawing madly behind the wheels, and the twin turbocharged W12 engine sounds turbine smooth and very glorious (albeit muted) when you open the double-glazed windows. It’s good to know that your Bentley can handle it, but in the end, the Flying Spur—even if it is Bentley’s sportiest sedan yet—is built for wafting effortlessly.

Our “nanny for the trip,” Robin Peel, the marketing director for Asia, China and other emerging/developing markets initially wowed us with various stories of his travels and of “merry olde England.” He answered my many curious questions about London and English culture, but eventually succumbed to the charming comfort of the backseat. I’d kid him from time to time that I felt like a chauffeur driving an English lord to his manor. Indeed, if Bentleys were around during the feudal-states era of China, they won’t be driven to their holdings in a horse-drawn carriage but in a Bentley.

Bentley has also been the Queen of England’s choice of vehicle from even before the start of her monarchy, (going 60 years this June 2013). While she has two bespoke Bentley State Limousines, (exact specs kept top secret, of course) she, along with the rest of the Royal Family, had made use of other Bentley models during official events and appearances both in the United Kingdom and abroad. Hence, the Royal Warrant of the Queen (as well as the Prince of Wales), which is essentially a stamp of approval for use fit for the Queen and her Royal Family, has been awarded to Bentley Motors Ltd. since the start of the Queen’s rule.

Now, driving—and riding—the Queen’s car through the city of the gods presents itself a unique experience. China has been newly motorized and has been buying cars at a very alarmingly high rate every single day. But the Chinese drivers still lack simple common sense, in my opinion. They pull out of intersections without heed of incoming traffic, often causing wet-bum moments for me as both driver and passenger. They suddenly stop in the middle of the highway whenever they realize they’ve missed their exit, and often drift-drive on the road (vehicle veering left and right like a slow-moving dance).

In this setup, the Flying Spur’s stately demeanor is tested. But, thankfully, its composure is maintained as the brakes, intuitive steering feel and suspension kept up to sudden, emergency maneuvers to avoid crashing into or even pranging the brand new Bentley. Just like the English Empire during the two world wars and James Bond being tortured by his captors, it remains calm and composed.

Overall, the Flying Spur is immensely impressive. While its a far departure from the usual car that I’d pick to drive for sheer pleasure, the Flying Spur’s charms can indeed make the journey more pleasurable, especially when you have interesting company on board, something you can’t really do in a 2-door, 2-seat sports car where you’d be automatically sucked into driving, forgetting your passenger altogether.

The last bit of impressive contrast between Bentley and Beijing? The Brits have managed to successfully preserve the sophisticated old-world cool and charm of Bentleys while infusing it with enough technology for the new, modern world. Yet the old-world charm is still the more obvious, more prevalent feature. The Chinese, on the other hand, have successfully fused modern architecture and technology in a city that is thousands of years old; you’d think it was built only in the last five years. Both Beijing and Bentley  are enjoying a renaissance at the moment. I can’t give Bentley any advice, but I just hope the Chinese remove the tacky looking LED lights and signboards from their impressive monuments and modern architectural marvels.