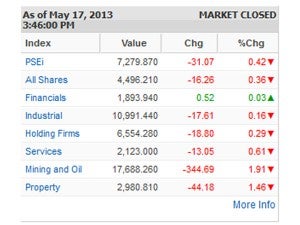 MANILA, Philippines–The local stock barometer slipped for a second straight session on Friday amid a brewing Philippine-Taiwan row alongside some profit-taking and portfolio realignment.

For the week, the index firmed up by a modest 0.2 percent despite the pullback in the last two days.

Value turnover amounted to P13.41 billion for the day.  There were 65 advancers which were no match for 101 decliners while 44 stocks were unchanged.

Bucking the day’s downturn was Asia United Bank, which gained 9.47 percent to close at P104 per share on its first day of trading on the PSE.

Mining stocks continued to be battered by concerns on revenue-sharing scheme.  As such, the day’s steepest decliner among PSEi stocks was Philex (-4.96 percent).

Joseph Roxas, president of Eagle Equities Inc., said the Philippine-Taiwan tension had some adverse impact on the market.  “It could affect the economy because of the number of Filipino workers in Taiwan,” Roxas said, adding that this was on top of the still ongoing diplomatic dispute with China and the recent standoff in Malaysia.

Tension with Taiwan escalated after a Taiwanese fisherman, whose fishing boat was purportedly in Philippine waters, was shot dead by the Philippine Coast Guard. Taiwan has frozen the hiring of Filipino workers, cut trade exchanges and discouraged travel to the Philippines despite an apology from President Aquino.