Stock markets ride high, but beware of a fall–experts 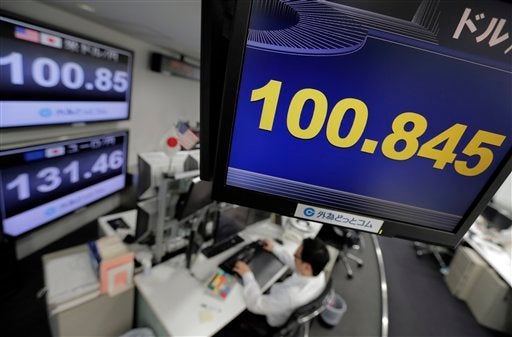 Money traders work under a screen indicating the U.S. dollar is traded at 100.845 yen at a foreign exchange company in Tokyo, Friday, May 10, 2013.(AP Photo/Itsuo Inouye)

PARIS – Optimism is blowing through stock markets around the world, lifting many of them to record high levels but this contrasts with widespread economic gloom and leads some analysts to wonder if some of it is just hot air.

Records have been created with increasing speed since the beginning of May.

The main DAX index in Frankfurt has reached a new record high level, and the markets in London and Tokyo have returned to the levels reached in October 2007 just before the financial crisis began.

Wall Street in New York is leading the way and sets a fresh record almost every day.

But the stock market in Paris lags behind. The main CAC 40 index has just risen to the level last reached in the middle of 2011 and is far below the record high level of almost 7,000 points set in October 2000, and still trails the 4,332 points registered just before the collapse of Lehman Brothers bank in the United States in September 2008.

Analysts at Swiss Life private investment managers commented recently that the markets “are swimming in the midst of paradox”, questioning the strong rises at a time when the global economic situation is a long way from being stabilised and is even deepening in some places, including in Europe.

In financial circles, experts give various explanations for the rise of stock markets in mature economies.

Some hold that it is an artificial bull market driven by huge amounts of money pushed into economies by central banks. Others say that the rises are justified because investors are anticipating a recovery of the world economy and a recovery of those stocks which have fallen heavily.

“The dichotomy between the real economy and the financial sphere is widening and this is worrying,” commented Guillaume Garabedian, a portfolio manager at French brokers Meeschaert Gestion Privee.

He held that that stock markets were rising mainly because central banks had been applying highly accommodating monetary policies, reducing their key interest rates, and pushing huge amounts of liquidity into the financial sector.

All classes of assets have been boosted by this, even the riskiest assets such as debt bonds issued by crisis-hit countries in southern Europe which are able to place their bonds despite still being in difficulty.

The rise of asset prices could even lead to a new financial bubble, some analysts are beginning to warn.

At Capital Spreads, Jonathan Sudeira said that “despite the efforts of the central banks, the volume of trading is falling and the high levels reached by some shares is beginning to look unjustified for traders who are being asked at the same time not to take account of the economic situation.”

The “bulls”, meaning those who think that share prices will continue to rise on a healthy and justified basis, also have their arguments. At the moment, they seem to have the upper hand.

Portfolio managers in dealing rooms say that investors are encouraged by signs that the US economy is recovering, by underlying strength of activity in Germany, encouraging statements by the leaders of big companies about the outlook for the end of the year, and by the removal of the risk that the eurozone might collapse.

At French Natixis bank, economist Philippe Waechter said that apart from the policies of the central banks, the situation in the United States, still the guiding light for stock markets around the world, was satisfactory and explained why optimism had lifted the indices.

“There is growth, certainly it is moderate, but it is there and so there is positive anticipation,” he said.

He noted that portfolio managers were looking for good rates of return from the shares they hold and consequently were inclined to go for riskier shares which offered higher returns.

In addition, companies which were cautious about trying to expand their businesses, were buying their own shares which pushed up the value of those stocks.

“Overall, we are in a context which is extremely favourable for stock markets,” he said.

Garabedian said that the question boiled down to analysing the fundamental causes of the rise.

“Because if the markets are rising for reasons which are not sufficiently viable, the correction will be severe,” he warned.