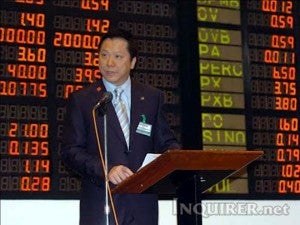 MANILA, Philippines–Gaming operator Travellers International Hotel Group Inc., a partnership between the groups of local retail tycoon Andrew Tan and the Genting group, has officially filed an application to conduct an initial public offering at the local stock exchange.

Tan-led Alliance Global Group, Inc. disclosed on Friday that Travellers had filed a registration statement with the Philippine Stock Exchange for a potential initial public offering.

The disclosure said the potential offering was at an “initial stage” and that the principal terms, including the number of shares to be offered, the offer price, and any pre-transaction reorganization, were yet to be finalized.

It was earlier reported that Travellers would tap five international houses to arrange an IPO estimated at about $500 million. The five underwriters are UBS, BoFA Merrill Lynch, CIMB, Maybank and Religare Capital.

The offering is targeted sometime in the third quarter of this year, based on previous reports.

Read Next
Dollar rises above 100 yen for first time in 4 years
EDITORS' PICK
TeaM Energy pushes development programs to help in pandemic rebound
Piolo Pascual: The Ultimate Heartthrob continues to level up
Want to help local farmers? Shop small and eat Real Food
ICC is everything but a court of ‘white people’
Manila is 78th most expensive city in the world for foreign workers
Garcia softens stance, meets IATF halfway on swab-upon-arrival policy
MOST READ
Sharon Cuneta on living in the US: ‘Nagagawa ko lahat ng normal na bagay’
Mike Nieto asks fans: ‘No below the belt remarks’ toward South Korea
Duterte-Duterte tandem possible but ‘winnability is another question’ — Binay
ICC is everything but a court of ‘white people’
Don't miss out on the latest news and information.