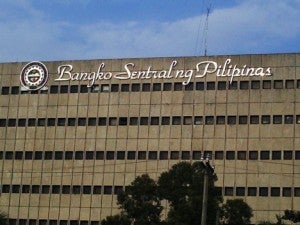 MANILA, Philippines—The Bankers Association of the Philippines said Wednesday its members will not comply with the Comelec’s “money ban,” which the group said would be disruptive to business and commercial transactions within the economy.

In a text message to the Inquirer Wednesday morning, BAP president Lorenzo Tan said banks would take orders only from appropriate regulators, the Bangko Sentral ng Pilipinas and the Securities and Exchange Commission.

The BSP released a statement late Tuesday indicating it was not about to order banks to implement the money ban, which prohibits the withdrawal of more than P100,000 from banks and other financial institutions from May 8 to May. The Comelec has also prohibited the “possession, transportation and/or carrying” of more than P500,000 in cash.

The Comelec said the money ban was meant to curb vote buying, which is believed to be rampant a few days before an election day.

But the BSP said that while the intention of Comelec was noble, implementing the money ban was  not the appropriate measure to achieve the goal of ensuring clean and honest elections.

“The BSP supports the Comelec’s goal to ensure clean and honest elections in the Philippines. However, the BSP believes that limiting cash withdrawals to P100,000 and for the monetary authority to enforce this may not be the best way to achieve the goal,” the central bank said in the statement.

BAP’s Tan said  many businesses require large withdrawals of money on a daily basis and implementing the money ban would be imprudent.

“This will hamper the commercial and business transactions of banks in general. Workers and suppliers of certain industries are paid weekly. Public markets operate on cash basis daily, Tan said.

The central bank gave two reasons for its opposition.

First, according to the BSP, the money ban could disrupt normal business and commercial transactions in the Philippines. It said it believed Comelec should have pursue other means to help ensure  clean and honest elections because sacrificing normalcy of economic activities in the country would be costly.

Second, imposing the provisions of the money ban would violate the laws on the secrecy of peso- and foreign currency-denominated bank deposits, particularly Republic Act 1405 and 6426, respectively.

For authorities to be able to investigate suspected violations of the money ban, bank accounts of concerned individuals would have to be looked into, it said.

“The BSP is constrained from enforcing the Comelec resolution because this would necessarily entail looking into bank deposit accounts. This is essentially unsound and in violation of RA 1405 and RA 6426,” the central bank said.

As of the evening of Tuesday, banks had not  received any directive for them to implement the money ban.

Bankers said the BSP, being the regulator of banks, should be the one to issue an order to them.

The BSP, however, was unlikely to issue any such  directive to the banks given its opposition to the ban.

Tan said the group had not yet received any formal order for them to implement the money ban.

“We have not received any official notice from any agency or the BSP,” Tan said in a text message to the Inquirer Tuesday night.

BAP is the country’s organization of universal and commercial banks.

Similarly, the Rural Bankers Association of the Philippines  said it had not yet gotten any formal instruction for its members to implement the money ban.

“Right now we have not been officially informed of the ban. If there is such a directive, then the Comelec should be communicating with the BSP, which in turn should be the one to give us the order because the BSP is our regulator,” Garcia told the Inquirer in a phone interview Tuesday night.

Garcia said the money ban, if indeed implemented, would be disruptive of business.