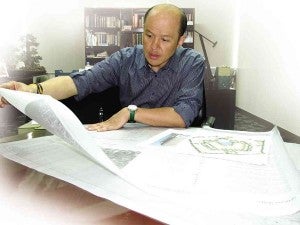 Good times are rolling for the Philippines’ real estate sector and thus the selling is easy for companies such as Empire East Land Holdings Inc., the listed subsidiary of real estate giant Megaworld Corp. servicing the burgeoning middle class.

Revenues are exceeding targets quarter after quarter on the back of continued influx of remittances from overseas Filipino workers, as well as the increase in the number of Filipinos with jobs that pay high enough for them to afford to buy their own home, be it a townhouse, a house and lot or a condominium unit.

But according to EELHI president Charlemagne Yu, it is not in good times when chief executives prove their mettle, but rather in the dark and difficult days when sales are hard to come by and companies are faced with a debt burden that becomes heavier as revenues dry up.

And in the cyclical world of real estate, the good times are always followed by the bad.

Fortunately for EELHI, 50-year-old Yu, a Law graduate from the University of the Philippines, has gone through both the good and bad and has come out ahead, putting him in a position to accelerate the company’s growth just enough to take advantage of high demand without falling into the trap of taking on more than it can handle.

“There are challenges every single day, but the most daunting of these challenges was the Asian Crisis from 1997 to the early 2000 years. Those were really trying times, and they brought out the worst and the best in people. Unlike in boom years, when it is easy to deliver expected results, a crisis like that is very different since it is the best way of testing one’s mettle,” says Yu, who takes time out of his schedule to teach Constitutional Law at the UP College of Law.

“There were tasks to be done and, as a team, we did them together. In our team, it was never a question of who gets ahead. It was always centered on how we would achieve the results we set out for ourselves,” says Yu, who has a Masters degree from the University of London.

Yu also says that he found the strength to carry on and face down challenges from his parents. His father was a businessman who was the first to get up in the morning and the last to sleep at night, while his mother was a homemaker who tutored him and his six siblings, honor students all.

“My mom was the disciplinarian while my dad engaged us through sports.  From both of them we learned that anything worth doing must be done with passion and excellence. I have learned so much from my parents just by witnessing how they lead their own lives. They showed us the dignity of hard work, and inculcated in us a sense of uncompromising integrity as well as genuine compassion for others. These lessons can only be taught by their example,” says Yu, who at one time worked as a waiter and dishwasher in a restaurant in Manila.

Yu adds that he has also learned to treasure extended discussions with his chair, Andrew L. Tan, with whom he would inspect properties or projects.

“Those moments of free-wheeling discussions have given me an indelible impression of a man whose vision has transformed the landscape of Philippine business. The unbelievable fortitude of this man has allowed him to transcend so many difficulties in both his personal and corporate life, and the same fortitude has allowed him to soar above the rest. Such fortitude is a trait I have long admired and is one not to be found among those who are handed what they do not deserve,” says Yu, whose first regular jobs involved academic work and research, including teaching at the schools he went to.

Yu, who became president of EELHI when he was just 34 years old, also admires Tan for remaining humble despite his undeniable success in the hypercompetitive real estate sector. Tan is not conscious about titles and Yu believes that titles such as CEO or president or chairperson do not make a person, and they never will.

“A lot of people make a lot of noise about the numerous tasks assigned to them. Only a handful are capable of really working hard and smart, often quietly, and are focused on obtaining the results. Such leaders usually allow others to take the credit for the work done and possess the sense of “malasakit” in their work such that they work as if they own the company,” says Yu, who is also president and CEO of Megaworld Central Properties Inc., developer of the 18-tower Manhattan Garden City at the Araneta Center.

Yu also credits his extensive work in civil society for providing him with a unique perspective on real estate development.

“None of my work in nongovernment organizations is done to promote any particular corporate interest. Yet, my experience in these very worthy causes has greatly helped me in my corporate life,” says Yu, who once worked for former Senator Wigberto Tañada.

Yu is chair of Erda Foundation, a group of four foundations that is devoted to helping street children and other less fortunate ones earn a living through skills training and formal vocational and technical education.

He is also president of El Nido Foundation, which was set up to provide alternative livelihood projects for the community to wean people away from extractive activities.

He is also a member of the National Union of Peoples’ Lawyers, and board member of Kaya Natin!

“Being part of the corporate world should never deter anyone from active involvement in genuine people’s causes,” says Yu, who also draws strength and inspiration from his wife and two children.

One could say that for someone so young, Yu has already accomplished more than enough. But he says that life has actually just begun.

“There is still the whole world out there to learn from and to conquer,” says Yu.