Sony executives give up bonuses 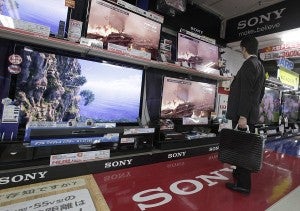 TOKYO—Dozens of Sony executives including the firm’s chief are foregoing bonuses this year in an “unprecedented” step to atone for a slump in its embattled electronics unit, a spokeswoman said Wednesday.

Chief executive Kazuo Hirai is among 40 top managers who will not get a bonus estimated at several hundred million yen (several million dollars) “due to severe business circumstances, including stagnant performance in the electronics sector,” the spokeswoman said.

Last year, seven top Sony executives gave up their bonuses “but the number this time is unprecedented,” she added.

The decision comes as the maker of PlayStation consoles eyes a profit after four years in the red. But its troubled electronics unit may remain mired in losses despite Hirai’s bid to drag it back to profitability.

Sony has launched a massive corporate overhaul that includes thousands of job cuts as it unloads a string of assets, including buildings in Manhattan and Tokyo.

Last week, Sony doubled its annual net profit forecast for the last fiscal year to March, saying it expected to earn 40 billion yen as a weaker yen and the asset sales helped boost its bottom line.

A tumble in the value of the yen in recent months—losing about a fifth against the dollar since November—has helped exporters make their products move competitive.

Sony reports its full-year results on May 9.

The firm’s Tokyo-listed shares, which last year fell below 1,000 yen for the first time since the era of the Walkman, closed down 1.85 percent to 1,583 yen on Wednesday.