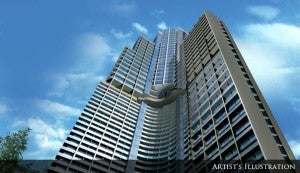 MANILA, Philippines—Originally planned to be a 65-story residential building, Century Properties’ The Gramercy Residences’ topmost floor was completed in February 2011. Then standing at more than 70 stories, it was at the time touted to be the country’s tallest building. Launched in 2007, Gramercy, which is located along Kalayaan Avenue in Makati City, was the first residential tower at the 3.4-hectare Century City.

Century Properties said its Century City Development Corp. had “adequately complied with all the requirements” of regulators, adding that it had “legally obtained” building and occupancy permits for Gramercy, including its five additional floors.

Stratford Place, a Picar development, had been previously announced to have 74 stories.

According to its official website, The Gramercy Residences, a “New York-inspired luxury tower” is the country’s “first fully furnished, fully serviced, hyper-amenitized and fully technologized condominium.” Its amenities include concierge services, spa services, restaurants, a fitness center, and state-of-the-art digital communications via Ultra digital connectivity package powered by PLDT, Cignal, Smart and Sun Cellular. It is based on a design collaboration between architectural firm Roger Villarosa Architects & Associates and Jerde Partnership.