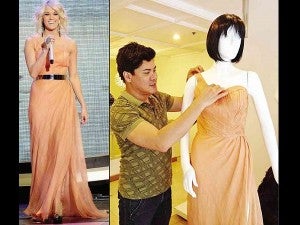 It was 2009 and the United States was deep in the midst of the Great Recession, said to be the worst since the Great Depression of the ‘30s. Among the worst hit was the fashion industry, particularly in the major cosmopolitan cities of Los Angeles and New York, where many fashion designers had closed shop and even major department stores had stopped carrying couture clothes. As unemployment hit its peak at 10 percent, Americans had no choice but to take to a simpler life, where everything, including clothing, gravitated towards the generic.

Yet it was in the middle of 2009 when Filipino designer Oliver Tolentino chose to make his dream come true and open a couture house (as differentiated from just a boutique or a shop), along Melrose Avenue in Los Angeles.

It was an absolute risk to open in the middle of a financial crisis, Tolentino now admits. “But at that time, failure was not an option for me,” he says.  He felt that even while the world around him was in financial chaos, it was the right time for him. After all, as a young designer who started his craft in his hometown in Orani, Bataan and later, in the big city of Manila, Tolentino had long prepared the groundwork for the fulfillment of his international dream, including earning degrees in fashion and in advertising both from Manila and US schools.

From then on, there was no stopping Tolentino who is now always expected to be in the roster of designers who dress up Hollywood A-listers for their red carpet moments, especially during those glam awards nights. Among those who have worn an Oliver Tolentino are country singer Carrie Underwood, Fergie of Black Eyed Peas, TV host Giuliana Rancic, Academy Award nominated actress Anna Pacquin, Emmy Rossum, Maria Menounos, among others.

Tolentino’s clientele will not be complete without the Filipino-Americans who count as among his loyal patrons, the very people who opened doors of opportunity for him to try it out in the US. In the early 2000s, Tolentino would be traveling to the US for some clients but would just stay for about a week or two.

It was in one of those trips where he met his now partner Andrew Caruthers who would then travel to Manila to see Tolentino and in the course, observe how the fashion designer would balance his craft with his business.

One of the many, many words of wisdom that Tolentino’s mother, Lydia Sioson Tolentino,  had ingrained in him was to “truly and fully know his business.”

“My mother would always tell me ‘Oliver, know everything about your business, you cannot be a designer not knowing how to sew, make patterns, and do finishing.’ She told me to make sure I know all the details of the business, to focus on one field and be good at it,” Tolentino recalls.

And Tolentino did just that—he learned the ropes of the clothes trade, managing his atelier here in Manila and personally handling all its aspects—from design to production; from finance to human resources. But all these tasks being done simultaneously by one person were sapping the creative energy out of Tolentino. Caruthers volunteered to step in. 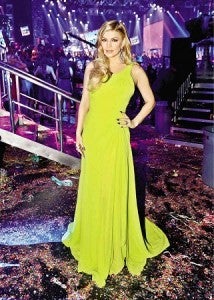 “I began suggesting why don’t you do it this way, or handle your finance this way. It is incredibly important for a designer to know finance, most designers do not make it because they do not understand the business or they do not have someone they can trust to handle the business,” explains Caruthers, now president and CEO of Oliver Tolentino Couture Inc.

One of the first things that Caruthers instituted was the early delivery of bridal gowns. After all, weddings comprise 70 percent of Oliver Tolentino Couture, and Caruthers does not want to see sweet brides transform into bridezillas who stress over late deliveries.

“I believe in operating the business as if you were on the other side, and if I were the bride, I do not want to be stressed. The dress is one of the elements of stress in a wedding and we do not want that. Soon, by word of mouth, brides tell other brides that Oliver delivers a month before the date and that is something that every bride wants,” Caruthers says.

With the burdens of finance, marketing and promotion off his shoulders, Tolentino was thus left to concentrate on design. The House of Oliver Tolentino was able to churn out beautiful creations, unique enough that the house designer started to get invitations from major fashion events in Los Angeles, and be noticed by topnotch stylists, celebrity handlers, and the stars themselves.

Putting PH fabric on the scene

Because he could afford to fully concentrate on the creative aspect of the business, Tolentino also started to explore opportunities to introduce Filipino fabric to the international scene. In the past, he has successfully experimented with Philippine fabrics made of abaca, water lily, jute and raw silk cocoon.

“I believe that Philippine fabrics stand a chance in the international fashion world. The piña for instance, angat na angat siya. There are a few countries that produce hand woven fabric and our piña is probably the most beautiful. I studied it thoroughly, I go to the sources in Aklan and observe the harvesting of the pineapple leaves, the weaving. I want to know if the process is 100 percent eco-friendly because that is a qualification in the international market, like how many gallons of water were used in the process, what chemicals were used on the fabric, pinag aralan ko and lumabas na 100 percent eco-friendly. I asked myself, who else  would promote this lovely fabric but a Filipino who is already in the international scene?” Tolentino avers.

Tolentino is also raving about the hand embroidery being done in Lumban, Laguna that he has decided to incorporate this in a future collection that will showcase embroidery in casual, everyday clothes, and cocktail dresses.

“On this trip to the Philippines, I am meeting with suppliers who could help me produce my ECO collection. The designs will be absolutely modernized but the glory of the piña fabric will still be the main focus. There is something about seeing the finished product arrive on your table, you feel different, ang ganda ng storya ng damit, that everything has been made by hand, with love, with very special care,” the designer gushes. 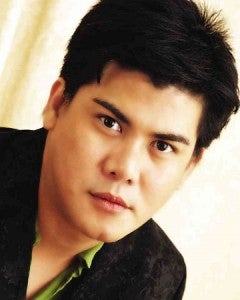 Tolentino is also the first to defend the piña or the embroidery when its pricey-ness is in question.

“Some say it is not consistent, or that the design is not computerized, but that is precisely what I like about it, they are made by hand, something that you cannot buy anywhere else. The imperfection in embroidery is very interesting. Mahal pero pwede mong ipaglaban kung bakit siya mahal. Di mo matatawaran especially after knowing the tedious process that goes behind it,” he adds.

These wonderful couture creations, as well as his off-the-rack collections,  can both be found in Tolentino’s shops in Los Angeles, or in Makati (Colonnade Residences, Legazpi St.,  Makati).

Words of wisdom from mom

Tolentino is the youngest of four children of an engineer father and an agriculturist mother. His father being an overseas contract worker, Tolentino grew up mostly with his mother from whom he derives inspiration to this day, long after her death a few years ago.

“My mother already saw it in me as early as when I was 7-years-old. She would see that the back of my notebook would have sketches of clothes so she would buy me imported fashion magazines from the PX goods stores in Angeles City. She would show how Hollywood stars dress up and would encourage me to follow what my heart desired,” Tolentino recalls.

Instead of playing with his siblings and cousins, Tolentino would rather sew clothes for his teddy bear or make slippers, using the manual sewing machine that his mother gifted him with. For his school projects, he would fashion lanterns out of jute sack, or fancy jewelry boxes out of banig.

It was also from his mother that Tolentino would learn about sharing his achievement with other people.

“My mom was loved by everyone in Orani, because she taught farmers in Bataan how to plant, how to use fertilizers. She would always remind me to think not only of myself because it should not always be me, there should be other people who should benefit from what I do—either the weavers, the embroiderers, the workers, there should not be a place for greed,” Tolentino adds.

“She told me, ayokong ayoko na maiinggit ka. She does not want me to be envious of the success of others, but believe in my talent, nurture it and use it in the proper way that God wants me to use it. She told me to be patient and wait for the perfect time,” he says.

The time has indeed come for this young designer. In fact, time (and timing) has always been on his side—from the time he set out from Bataan to let the country know of his craft, to the time he opened his house in Los Angeles even amid a financial downturn.  Indeed, at this point, this designer would only love to see that time when every Filipino can be seen proudly wearing an Oliver Tolentino.