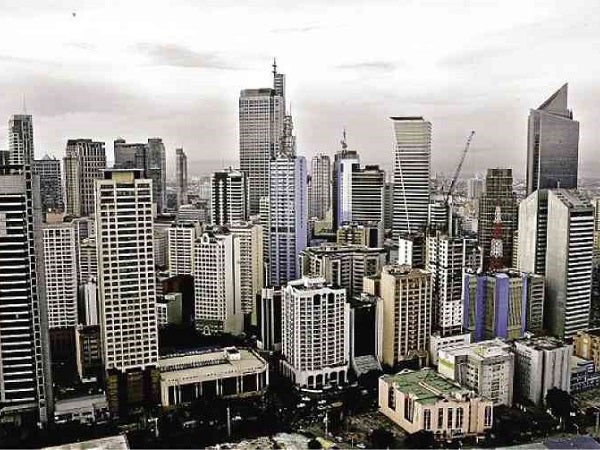 MAKATI is considered the traditional business district where ‘most businesses thrive and mature property developments are located.’ FILE PHOTO

How important to the local property industry are “report cards” from foreign investors? Apparently, they can spell the difference between progress and stagnation.

Inquirer Property previously reported that in 2011 the local property industry received sobering news that Manila had been ranked “below fair” to “abysmal” by foreign property investors (as reported in the “Emerging Trends in Real Estate Asia Pacific 2011” survey conducted by the Urban Land Institute). However, the following year the “ULI Emerging Trends 2012 Asia Pacific” upgraded Manila’s rank to 18th in investments (from 20th in 2011), prompting a noticeable uptrend in property investments, particularly in emerging urban districts (EUDs) and central business districts (CBDs).

Now, another report card from foreign investors could give the local office, manufacturing, residential and retail sectors a big boost.

The second quarter 2013 report said the Philippines finally achieved its first investment grade rating from one of the world’s major rating agencies. It stressed that the real estate sector is expected to gain from this recent development.

It stated that with the Fitch Ratings announcement upgrading the country’s sovereign credit rating to BBB- from BB+, the country is now on the global radar for investments, and has legitimately become an investment “hotspot.” Also cited were two other major international credit rating firms—Standard and Poor’s (S&P) and Moody’s—which the report said “still rate the country one notch below investment grade but are expected by analysts to soon follow suit.”

The report listed the sectors standing to benefit from these ratings: the office, manufacturing, residential and retail sectors.

The CBRE report said: “Foreign investors will logically move or expand to regions that are being upgraded. This increased interest in the country will boost the demand for office and manufacturing spaces. Foreign Direct Investment (FDI) inflows, which grew by 15.5 percent in 2012, the third highest in Southeast Asia, are expected to continuously increase following the recent credit rating upgrade. The entry of more FDIs will continue to fuel the resurgent manufacturing sector.”

The Clark and Subic Freeport Zones, which the report listed under the manufacturing sector, have been “accommodating a number of Japanese and Taiwanese manufacturing firms and offer 13.4 million square meters of leasable industrial space.”

The office sector “looks to be in great shape in the coming years because the Information Technology and Business Process Outsourcing (BPO) industry boom won’t abate anytime soon,” the report said.

It continued: “The industry, which generated $13.4 billion in revenue and has 720,000 employees, surpassed its 2012 target according to the Business Process Association of the Philippines. Due to the current political turmoil in East Asia and the financial struggles in the Western world, US and European companies are more focused than ever on expanding or relocating to emerging economies.”

Joey Radovan, vice chair of CBRE global corporate services, projected that BPOs will occupy 80 to 90 percent of office space supply in 2013. More multinational corporations will set up BPOs in the country in order to fulfill cost reduction strategies, while current locators are preparing to expand local operations to further reduce costs.

The report said: “As foreign businesses enter the country, expatriates will look for practical accommodations such as upscale and luxury residences near business centers. It would most likely raise the demand for residential condominiums in CBDs. Consequently, the jobs created by FDIs will elevate the spending power of the middle class, which in turn could lead to an increased ability to purchase houses or condominiums. Demand for affordable to mid-range residential segments will continue to pick up—and given the platform of low inflation and mortgage rates—a democratized housing industry will soon emerge.”