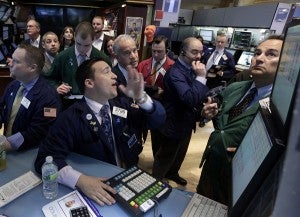 In this Tuesday, April 16, 2013, photo, specialist Paul Cosentino, left center, works at his post on the floor of the New York Stock Exchange. US stocks closed sharply lower Wednesday in the wake of disappointing earnings reports and a 5.5 percent plunge in Apple shares, along with dreary economic sentiment in Europe. AP PHOTO/RICHARD DREW

NEW YORK—US stocks closed sharply lower Wednesday in the wake of disappointing earnings reports and a 5.5 percent plunge in Apple shares, along with dreary economic sentiment in Europe.

The losses came after a disappointing earnings report from Bank of America sent it and other banking shares lower.

The US retreat also followed a day of losses in Europe amid speculation of a German credit rating downgrade and commentary from the head of the Bundesbank predicting that the European economic slump would last a decade more.