Gold claws back losses after biggest fall in 30 years 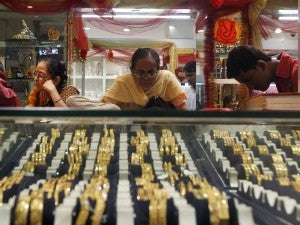 An Indian woman looks at a display of gold jewelry at a shop in Mumbai, India. Gold prices recovered slightly on Tuesday, April 16, 2013, after suffering their heaviest slump in 30 years triggered by weak Chinese growth data and reports Cyprus was planning to sell part of its reserves. AP PHOTO/RAJANISH KAKADE

HONG KONG—Gold prices clawed back some losses Tuesday after suffering their heaviest slump in 30 years triggered by weak Chinese growth data and reports Cyprus was planning to sell part of its reserves.

Analysts said the 13 percent drop in prices between Friday’s open and Monday’s close could show gold’s 12-year bull-run was at an end, with investors turning away from the metal, which is traditionally a hedge against inflation.

Investors were spooked after China released data Monday showing growth in the world’s No, 2 economy had slowed in the first quarter to 7.7 percent, below forecasts and indicating a recent pick-up remained fragile.

The news also hit equity markets, while other commodities also tumbled, with the May contract for Brent crude falling below $100 a barrel for the first time since July. China is a huge importer of oil to drive its vast economy.

Speed and extent of sell-off

“It’s the speed of it and the extent of the sell-off that shocked everybody,” Kelly Teoh, a market strategist at IG Markets in Singapore, told AFP. “For the rest of the week it’s going to look quite bearish.”

The longer-term view is that with inflation expectations still flat—as US and Chinese data indicate—people who buy gold as a hedge against rising prices have been driven to dump bullion.

“Gold has had a 12-year run. It’s done really well. But if you’re holding a position and you’re seeing you’re getting a better yield in the cash markets it’s a natural move,” said Teoh.

Adding to unease were reports last week that the central bank in Cyprus is looking at selling some of its 14 tons of gold to help pay for a bailout agreed with the European Union and International Monetary Fund.

Joyce Liu, investment Analyst at Phillip Futures in Singapore, said such a move fueled concerns that other troubled countries could follow suit as they struggle with ongoing debt woes.

Liu also said traders were likely moving out of the precious metal, which is seen as a safe bet in times of economic uncertainty, as the US recovery picks up and the eurozone crisis eases.

In Hong Kong, jeweller Amy Lee said buyers who had rushed to buy gold after Friday’s losses had cooled off on Tuesday as they wait for prices to fall further.

“People are buying gold as a hedge against inflation and they see it as a good chance to buy now with the prices falling,” said Lee, from Pak Kong Jewellery & Goldsmith.

“But we have seen fewer customers (Tuesday), I think that’s because they are waiting to see if the prices will continue to fall.”

But Singapore-based investment guru Jim Rogers said he would not buy yet as there was more room for prices to go down.

“I’ve not been buying gold because it needs a correction. Gold’s only had one correction of over 30 percent in 12 years, which is very unusual,” the Straits Times newspaper quoted Rogers as saying.

“If it goes down low enough, I’ll start buying it again.”

Julian Jessop, chief global economist at Capital Economics in Singapore, said in a market commentary that the slump had been triggered by “speculative traders, rather than any change in the long-term or fundamental drivers.”

“Gold has also been caught up in the broad-based weakness in commodity markets, including oil and industrial metals, due to softer US and Chinese economic data. Once trading calms down, we expect gold to stage at least a partial recovery,” he said.