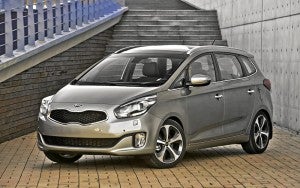 Auto companies have always been passionate about their search for fresh concepts in designing a family vehicle.

But nowadays, there are hardly any secrets to how to do this. Improvements in engine power, a few tweaks on technology, addressing safety issues, defining competitive price points, and coming up with design ideas that can translate to making a difference can be found in almost every sales and marketing kit designed to sway customer decision.

Surprisingly, Kia has found a new way to capture one’s curiosity by pushing the envelope with its “Power to Surprise” slogan, a new selling proposition that should embolden the brand’s aspirations. 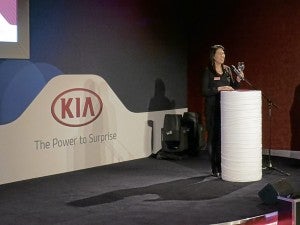 Kia recently brought a group of journalists to Monte Carlo to present the all-new Kia Carens. Of course, launching a Carens in Monaco is already a surprise as the hallowed roads that snake around the tiny capital are perceived to be exclusive grounds to super cars such as Lamborghinis, McLarens, Bentleys, Audis, Ferraris, Porsches and so many other ultra-luxury cars that whiz by at any given time of the day.

But wait, taking the all new Kia Carens for a spin around Monte Carlo was not all about feeling like a wealthy high-roller spending wads of cash at the gaming tables or a James Bond out to break up a crime ring. It was for some privileged Asean motoring journalists to determine if a vehicle like the new Carens can live up to a promise of changing the game of selling family vehicles for Kia.

So however jet-lagged these journalists were from the long-haul trip, they found themselves anticipating a surprise from the much-improved Carens despite the streaking rains of March, the cold winds from the Bay of Monaco, and the temptation to stay indoors, take a few chances at the casino, or just have coffee at the few bars where a cappuccino was already worth the bill of a dinner buffet in Manila.

No one was disappointed at all with driving the Carens. 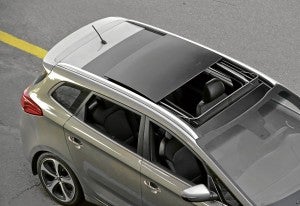 A seven-seater multipurpose van, the Carens has both beauty and substance. More than good looks built around the tiger nose front grille that is standard issue to every new Kia car during the last couple of years when design chief Peter Schreyer’s introduced sweeping changes in style, the Carens offers more space and comfort. This is all because of a significant increase of about 50 millimeters on the wheelbase.

That additional length allowed Kia engineers to open up more room for the driver and passengers, and turn the Carens from a carriage into a personal van capable of taking in more cargo long or wide. The front row and second row seats could be adjusted 60:40; or completely folded for more luggage space.

Thinking business class? There is a foldable table at the back of the front seat that makes eating or use of portable gadgets easy for passengers. The large panoramic sunroof also adds a nice touch to the ambiance inside the cabin, providing enough natural sun or moon light to suit one’s inclinations. 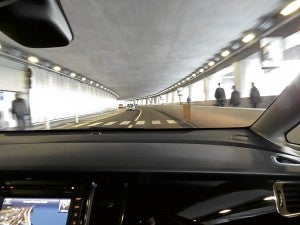 THE CARENS passing through the famed tunnel in Monaco

A father driving the car and his wife on the front seat can also freely interact with the children at the back through a wide-angle conversation mirror in the overhead console, now a must-have standard for every vehicle with a “family” tag.

“The all-new Carens is another winner from Kia in the small MPV category. Its 7-seat configuration with lots of ample space for mom, dad and the kids makes it an ideal car for a growing family,” said Boying Soriano, marketing head of Columbian Autocars Corp., the local distributor of Kia.

This iteration of the Carens is far more advanced and loaded with features down to the engine. Under the hood is a 1.7 diesel engine with maximum power of 136 ps and 33.7 kg-m of torque from just 1750-2500 rp with the manual transmission or 32.6 kg-m with the automatic transmission. 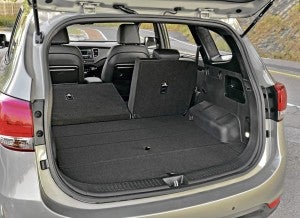 Those numbers might pale in comparison to the current batch of SUVs with 2-liter engines or more, but the Carens lives up to its name as a MPV that delivers a certain level of drivability while still fulfilling its roles as the family van. Kia even improved the view from the driver’s seat with a wide sweeping dashboard that offers excellent visibility.

More surprises can be found at the tail end of the van. The cargo security system at the rear keeps important items secure. Also, a storage compartment under the flooring at the rear right in the cargo section can be detached to become a portable flashlight.

All told, the Monaco sneak preview of Carens may be Kia’s way of sending a message that it’s putting a lot of its chips on the table with this model. And even that guy James Bond should be intrigued with Kia’s power to surprise.