Strike 3 vs China brand; Mirage recalled 2 days before Car of the Year victory at MIAS 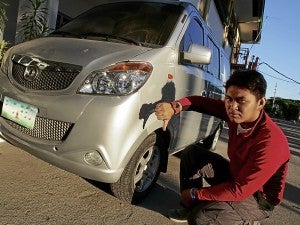 The defective Chinese-branded minivan and its Philippine distributor strike again. The first two instances these two had been mentioned in Repair & Despair, 15 units were involved, and they ran the gamut of customers’ complaints, from mechanical to design issues, from warranties to safety concerns.

Now, another irate customer has emerged, bringing to 16 the number of defective 1.0-liter minivans reported in this section.

A European businessman, who asks he be named only as “Dean,” said he bought this minivan for P500,000. Now he feels like he threw money away. “It’s a terrible car. Never buy it,” he bluntly said of the vehicle.

Dean, who has been living in the Philippines for seven years, bought the van brand new in December 2010 for his furniture business. “I needed a little car that could advertise my business,” he said.

Dean showed R&D the white minivan parked outside his store. The white minivan, which bore the name of Dean’s business, also had a big dent on its right side door. Dean said the dent was a result of a “slight” collision.

The dent was the least of Dean’s concerns, as he enumerated a shopping list of problems. “Everything is weak (in this vehicle). The suspension, the brake disc, the gearbox. We had a gearbox and an axle breakdown on the highway. We’ve had problems with ignition. The key doesn’t even fit into the ignition. Sometimes we have to force the key in.”

He added that the brake discs were replaced when it was still relatively new. “We’ve had three battery changes with this car. The car squeaks and makes unusual sounds.”

In disgust, Dean is now making a different advertising pitch on the car: “I’m selling it for P120,000 just to dispose of it.” 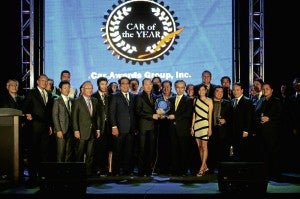 The local distributor has been of little help. “The problem with the distributor’s one-year service warranty is that all these issues have come out after a year. So we keep buying replacement parts. The last time it was serviced, we paid P17,000 for almost nothing.”

Dean does own other branded vehicles from this importer/distributor, and he says he has no problems with them.

Unlike Ruston Banal, the first complainant R&D featured involving the Chinese minivan, Dean would be thinking twice before revealing his true identity in time. “This is a crazy country. You could get killed by just singing ‘My Way.’”

Contrary to other motoring news reports, the voluntary safety recall announcement for certain units of the Mitsubishi Mirage came two days before Car Awards Group Inc. announced the subcompact as the 2012-2013 Car of the Year in the Philippines.

“We actually e-mailed the safety campaign announcement to the three major broadsheets as early as April 2 (in order to make the cut-off of the motoring section of one major newspaper). The same announcement was uploaded in our MMPC website April 3,” said Mitsubishi Motors Philippines Corp. marketing services vice president Froilan Dytianquin.

Dytianquin said, “though there is still no implementing rules and regulations regarding automotive recall in the Philippines, MMPC took the initiative to report the recall to Secretary Gregory Domingo of Department of Trade and Industry, (it) being the government lead agency on consumer protection.”

He added that the announcement was also for the interest of Mirage owners. “This is a proactive measure of ensuring that customer’s safety and welfare are at the top of our priorities.”

“The 1,420 units are all accounted for. Since this safety campaign announcement was made just a few days back, around 105 owners have responded and have scheduled for the replacement of the sensor harness. Aside from the announcement, the MMPC customer care center is in contact with the rest of affected owners.”