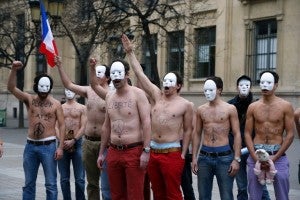 The eternal question of whether penis size matters to women has been probed by a team of international scientists who reported on Monday, April 8, 2013, that yes, ladies do find larger men more attractive. AFP PHOTO/PIERRE VERDY

WASHINGTON—The eternal question of whether penis size matters to women has been probed by a team of international scientists who reported on Monday that yes, ladies do find larger men more attractive.

What’s more, prehistoric women who could see the sex organs of their scantily clad male counterparts may have helped influence the evolution of larger genitals in men by choosing to mate with partners who were bigger.

Researchers said they decided to tackle the topic because past studies had offered conflicting answers, and may have been sullied by asking the women too directly.

“Since penis size is a sensitive subject, it’s hard to determine whether females lied or ‘self-deceived’ in their responses,” lead author Brian Mautz, a postdoctoral researcher in evolution and sexual selection at the University of Ottawa, told AFP via e-mail.

So they embarked on a new type of study, using computer-generated images of generic male figures with varying heights, body shapes and flaccid penis lengths.

A sample of 105 Australian women were asked to view 53 of these life-sized robot-like pictures, which rotated so they were visible at different angles.

The women—all heterosexual—were not told they were participating in a study about penis size. They were simply asked to rate the figures according to sexual attractiveness. Their answers were collected anonymously.

Researchers found that women rated tall men with long penises as the most attractive.

The women also tended to gaze longer at the larger men. But not too long—each rating was made in about three seconds.

But how big is best? On that question, researchers were, er, stumped.

“The attractiveness scores were still increasing at the largest values for these traits.”

The findings were published in a peer-reviewed scientific journal in the United States, called the Proceedings of the National Academy of Sciences (PNAS).

The results “directly contradict claims that penis size is unimportant to most females,” and also hint at why human males tend to have relatively larger genitalia when compared to other primates, the study said.

“Our results show that female mate choice could have played a role in the evolution of the relatively large human male penis,” the authors wrote.

“Before clothing, the nonretractable human penis would have been conspicuous to potential mates.”

The study did not get into the racial background of men and whether that may affect penis size, but it did document the ethnicity and age of the women it was studying for hints about whether penis size mattered.

More than 70 percent of the women were of European origin, 20 percent were Asian and seven percent were from elsewhere. Their average age was 26.

Read Next
Peugeot announces its return to Vietnam
EDITORS' PICK
Smart offers wireless fiber-like speeds to Filipino homes with country’s first 5G Prepaid Home WiFi
NGCP transmission tower in Lanao del Sur bombed
Legarda: Ending Violence Against Women, a cause for all
DOH: Booster doses for fully vaxxed adults to start December 3
Omicron: What science knows so far about latest Greek-lettered COVID variant
This new condo in the South will make you want to turn a new leaf
MOST READ
‘Maski na hindi ‘yung mga bright’: Duterte urges public to elect new leaders
Pacquiao to voters: If you can’t vote for me, then don’t vote for a corrupt candidate
Sereno warns: Those accusing Kris Aquino of ‘stealing’ Marcos jewels will face criminal case
Another disqualification petition filed against Bongbong Marcos
Don't miss out on the latest news and information.