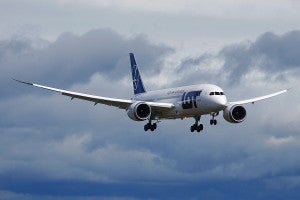 “That is making the atmosphere more vulnerable to the instability that creates clear-air turbulence,” he told AFP by e-mail.

“Our research suggests that we’ll be seeing the ‘fasten seatbelts’ sign turned on more often in the decades ahead.”

Turbulence is mainly caused by vertical airflow—up-draughts and down-draughts near clouds and thunderstorms.

Clear-air turbulence, which is not visible to the naked eye and cannot be picked up by satellite or traditional radar, is linked to atmospheric jet streams, which are projected to strengthen with climate change.

The jet stream affects traffic in the aviation corridor between Europe and North America—one of the world’s busiest with about 300 eastbound and 300 westbound flights per day.

They found that a doubling of carbon dioxide (CO2) in the atmosphere from pre-industrial levels, predicted within 40 years, would cause turbulence to be 10-40 percent more forceful at typical cruise altitudes.

“Turbulence strong enough to make walking difficult and to dislodge unsecured objects is likely to become twice as common in transatlantic airspace by the middle of this century,” said Williams.

“As well as making flights bumpier and less comfortable, this could also increase the risk of injury to passengers and crew”—especially in winter when Northern Hemisphere clear-air turbulence is thought to be most intense.

“A stronger jet stream means the atmosphere is less stable, which creates more turbulence,” he explained.

The study, published in the journal Nature Climate Change, said planes already spent about one percent of their cruise time in strong clear-air turbulence.

Frequent flyers have reported bumpiness to be on the rise, but this is the first study to actually measure the projected impact of climate change, said the authors.

“Flight paths may need to become more convoluted to avoid patches of turbulence that are stronger and more frequent, in which journey times will lengthen and fuel consumption and emissions will increase,” they wrote.

“Aviation is partly responsible for changing the climate in the first place,” added Williams.

“It is ironic that the climate looks set to exact its revenge by creating a more turbulent atmosphere for flying.”