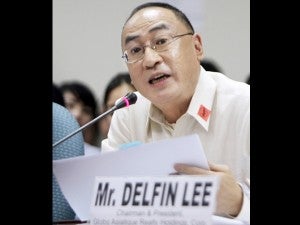 SAN FERNANDO, Pampanga—Fugitive housing developer Delfin Lee and four coaccused cannot leave the country on orders of the judge hearing the case of syndicated estafa against them.

Lee et al. are accused of fraudulently availing since 2008 of some P7 billion in loans from the state-run Home Mutual Development Fund, or Pag-Ibig Fund, allegedly using fake and nonexistent home buyers.

Reyes, who presides over Regional Trial Court Branch 42 here, issued the HDO on the motion of government prosecutors who submitted certified documents from the Bureau of Immigration concerning the passport and travel arrival information of the accused.

The Lees, Sagun, Salagan and Alvarez are apparently still in the Philippines. Authorities have failed to arrest Lee despite a P2-million reward.

Lee’s lawyer, Willie Rivera, said they would contest the HDO. “We will file the appropriate action,” he said by phone on Thursday.

The lawyer said he communicates with Lee only through the mobile phones of the fugitive’s trusted emissaries.

In her HDO resolution dated March 25, Reyes continued to refer to the crime of syndicated estafa, although a division of the Court of Appeals had ordered her in February to quash that information against Sagun and recall the arrest warrants she had issued against the accused in May 2012. This virtually downgraded the case to plain estafa, a bailable offense.

But Reyes, citing a Supreme Court ruling, argued that the “activity of subdivision and condominium development which is under the [Housing Land Use and Regulatory Board] involves the public interest and welfare.”