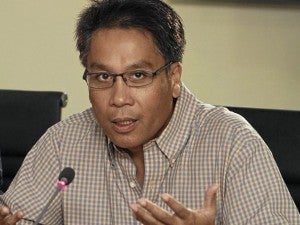 MANILA, Philippines—Interior Secretary Mar Roxas and Sen. Loren Legarda on Saturday attributed the decision of Fitch Ratings to award the country with its first-ever investment grade rating of BBB- from BB+ on the reform-oriented and transparent governance of President Benigno Aquino III.

“It reflects the Philippines’ good fundamentals arising from President Benigno Aquino III’s leadership, enabling takeoff. Our challenge now is to ramp up to cruising altitude, so that we could soar higher,” Roxas said in a phone interview.

Legarda credited her colleagues in Congress for providing the Aquino presidency with the crucial political backing to ensure the success of his legislative agenda.

“We are the great survivor of the financial crisis which hit Europe and other Asian countries. This impetus will lead to sustainable and inclusive growth, thanks to the cooperation of both houses of Congress with the good governance policies of President Aquino,” Legarda told the INQUIRER.

Legarda said she sees global funders and multinational corporations funneling massive investments into the country in the short term.

But “being complimented as a ‘rising tiger’ is not an excuse for complacency,” said Presidential Communications Operations Office Secretary Herminio Coloma.

Coloma said the global excitement on the surging economy of the country is an “inspiration to carry on continuing long-term reforms that will bring about a change in mind set and empower our people to participate in community-building and establish enduring democratic institutions.”

Fitch Ratings, the first of the three major international debt watchers to upgrade the Philippines, also assigned a stable outlook for the country’s credit rating.

It cited the country’s sovereign balance sheet as being comparable to those of “A”-rated nations, while a “persistent current account surplus, underpinned by remittance inflows” has made the country a “net creditor” from its previous deficit position.

Fitch also noted the economy’s 6.6-percent economic growth for 2012 and the expected 5.5-percent growth for this year, both of which are “stronger and less volatile” than those of BBB-rated peers over the last five years.

Parañaque Rep. Roilo Golez preferred to describe the economy as a “tiger cub” that was “starting to growl.”

He said the Fitch upgrade was “good timing because the US and Japan are starting to reconsider China as investment haven,” explaining that Japanese companies were “under assault there and Apple, an American icon, is being bashed by Chinese state media.”

Another administration ally, Sen. Francis Pangilinan, welcomed the upgrade, but said a lot of work needs to be done “to reach levels of economic growth that will be inclusive and sustainable.”

He pushed for the creation of employment here at home instead of relying on remittances from overseas workers.

“Infrastructure, tourism and agriculture are key sectors we need to focus on if we are to reach developed-nation status in 15 to 20 years’ time,” he said.

On Wednesday, President Aquino credited the trust of the global economy on the Philippines on the accelerated pace of reforms over the last three years.

“This means much more than lower interest rates on our debt and more investors buying our securities. Greater access to low-cost funds gives us more fiscal space to sustain and further improve on social protection, defense, and economic stimulus, among others,” Mr. Aquino said.