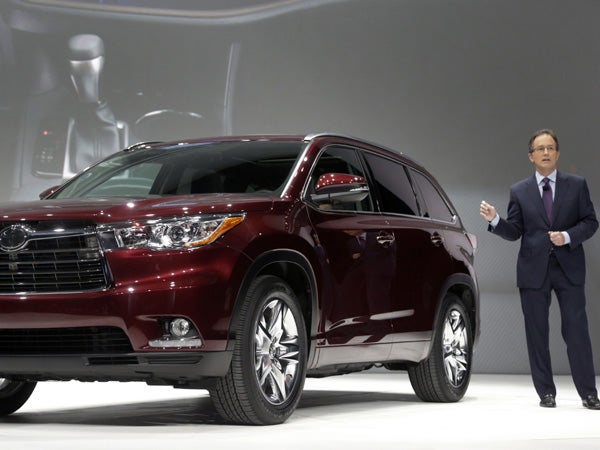 NEW YORK — Toyota’s Highlander family hauler is getting quieter and more stylish, but with the look of an athlete who’s not afraid to mix it up.

The automaker unveilied a new version of the SUV on Wednesday at the New York auto show. It’s less boxy-looking on the outside and has richer materials on the inside. The Highlander can now fit an eighth passenger, it handles better and the ride gets quieter, the company says.

The changes should make the aging Highlander more attractive to buyers who’ve preferred the Ford Explorer and the Jeep Grand Cherokee.

Toyota sold just over 121,000 Highlanders last year, up 20 percent from a year earlier. Jim Lentz, the company’s top North American executive, said big family hauler sales should grow this year, but it will be difficult to take sales from other automakers because there are so many great vehicles in the market.

“Our sales will go up, but it’s going to be difficult probably to grow share in that strong of a market,” he said.

Lentz expects to sell about 135,000 Highlanders this year, but said Toyota might not be able to make many more of the SUVs at its factory in Indiana.

“All of our production is going to be from the U.S. now,” he said. “We also are going to start exporting a significant amount of Highlander to other parts of the world.”

Here are the highlights of the 2014 Highlander, which will go on sale early next year:

OUTSIDE: Toyota lowered the roof line and rounded the fenders and door panels, making the SUV look more modern. The outside is about three inches longer and a half-inch wider than the current Highlander, giving it a more athletic look. Toyota repositioned the front pillars and made the rear glass wider so that drivers can see more. There’s a new rear lift gate with one-touch power opening and closing. Toyota says it also beefed up the suspension, tuning the springs and shock absorbers to improve handling.

INSIDE: Buyers can configure the second-row seats as a three-passenger bench or two captain’s chairs. The bench boosts the seating capacity of the new Highlander to eight from seven. Toyota says it went to great lengths to cut vibrations and engine and wind noise by adding insulation in the floor and sound-deadening glass in the windshield. The interior gets softer materials instead of hard plastic as well as silver, satin and chrome-plated accents. The second row of seats also slides more to give people three more inches of room to get back to the third row.

PRICE: Not released. The Highlander now starts at just over $29,000.

CHEERS: The new version brings the Highlander up to date and makes it more competitive with the Ford and Jeep.