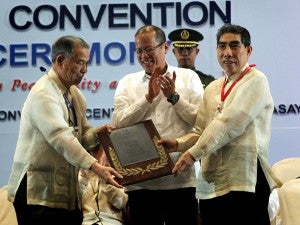 MANILA, Philippines — The head of the 207-member Federation of Filipino-Chinese Chambers of Commerce and Industry, Inc. (FFCCCII) has vowed to strongly support not only the government’s tax collection campaign but also President Aquino’s “Daang Matuwid” crusade.

Businessman Tan Ching said on Monday, they would encourage the Chinese-Filipino community “to be very diligent in paying their tax obligations and pay the right taxes on or before April 15.”

The FFCCCII, the umbrella organization of all Chinese-Filipino business groups nationwide, will also “continue supporting the government’s tax campaign by disseminating important information on tax laws and regulations to the Chinese-Filipino community through seminars and press releases, among others.”

In a statement, a copy of which was furnished the Philippine Daily Inquirer, Tan Ching also said they would “continue our programs, such as barrio school donations, relief operations and medical missions” to poor communities nationwide.

“To create more jobs for our countrymen, we will continue to intensify our “Buy Pinoy, Save Jobs” campaign,” he asserted as he also pledged their “continued support to the government in the collective task of nation building as we become a strong tiger economy in Asia.”

Last Friday, President Aquino expressed shock over the incredibly low taxes – or sometimes none at all, that affluent Chinese-Filipino businessmen were paying.

The President’s admonition to the tax-evading Chinese-Filipino businessmen was made during the annual meeting of the FFCCCII in a Pasay City hotel.

In a speech, he also expressed surprise that only 105 of the federation’s 207 members had tax identification numbers.

“I wonder what happened to the others. Of these 105 firms, only 54 filed tax returns. To make matters worse, 38 firms and organizations actually filed returns with zero tax due. That means only 16 of the 207 paid taxes. The 6.6 percent economic growth rate do not seem to affect your members,” said the President.

For her part, Bureau of Internal Revenue Commissioner Kim Jacinto-Henares urged members of the business community to file the proper tax returns before next month’s deadline.

“The President’s speech was an appeal to them. The message basically was, we recognize that you’ve been helping the country and contributing to charitable work, but can you please pay the right taxes by April 15?’ she said.

Henares said the BIR was looking into possible tax evasion cases involving local businessmen. However, she emphasized there was “no witch hunt” among specific ethnic groups.

The BIR head also stressed “this is not a racial thing,” noting they would not target the Chinese-Filipino community.

“You’re a citizen of this country. You must pay the right amount of tax,” she added.