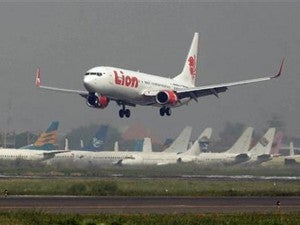 In this May 12, 2012 file photo, a Lion Air passenger jet takes off from Juanda International Airport in Surabaya, Indonesia. Indonesia’s top discount carrier Lion Air, which catapulted into the global aviation spotlight with record deals to buy Airbus and Boeing planes, is taking the battle for Asia’s budget-minded travelers to the backyard of the airline that helped pioneer low cost flights in the region. AP /Trisnadi, File

JAKARTA – A new rivalry between the world’s biggest planemakers is heating up in Indonesia after a record deal for Airbus in a market with huge potential that until now has been a “fortress” for Boeing.

The European company in the past consistently lost contracts to its US rival in Southeast Asia’s top economy, but budget carrier Lion Air’s 18.4-billion-euro ($23.8 billion) order last week for 234 medium-haul Airbus jets may be a game-changer in the feud for market share.

“This is a major deal for Airbus because, generally, Indonesia has been a fortress for Boeing,” Ravi Madavaram, an aerospace analyst for Frost & Sullivan in Kuala Lumpur, told AFP.

“I think the moment Airbus comes into the picture, more and more low-cost carriers will want an Airbus A320. Then it becomes challenging for Boeing to catch up.”

Lion Air’s A320 deal with Airbus announced in Paris on Monday was the most valuable commercial order booked in history. The second-biggest was also made by Lion Air in 2011, in a $22.4 billion order for 230 Boeing jets.

The two planemakers have a duopoly over the large-airliner market and competition between them is fierce, with each regularly accusing the other of anti-competitive behaviour.

Boeing last year overtook Airbus as the world’s biggest planemaker in terms of aircraft delivered for the first time in 10 years.

“Lion Air was in fact one of the few airlines in the region that had never ordered an aircraft from Airbus. But we never gave up,” Jean-Francois Laval, executive vice president of sales for Airbus Asia, told AFP.

“We have not exactly been absent from Indonesia. The new order from Lion Air will significantly increase our presence in the important Indonesian market.”

But Boeing says the Airbus deal has not ruffled its feathers as it works to deliver more than 300 jets ordered from Lion Air and its offshoot carriers.

While slow growth in Western economies is hitting the aviation industry, Asian countries are booming with an emerging middle class keen to take to the air.

“There are three billion people in Asia, there are 300 million people in America. America has about three times more planes right now than Asia,” Tony Fernandes, founder and CEO of Malaysia-based AirAsia, Asia’s biggest budget carrier, said recently in an interview with Bloomberg Television.

Indonesians are increasingly relying on air travel to link the archipelago of 17,000-odd islands, with up to 900 new planes set to be delivered to Indonesia in the next decade, according to the government.

The potential is massive — only six percent of Indonesians have travelled by air, according to officials, in a nation of 240 million people that has consistently clocked annual economic growth above six percent.

By 2021, some 180 million passengers are expected to fly domestically in Indonesia, triple the 2011 number, according to the CAPA Centre for Aviation.

But in their rush to meet that latent demand, airlines risk buying too many new planes, CAPA chief analyst Brendan Sobie said.

“In some markets you’ll see over-capacity,” he said, warning that carriers will find it hard to turn a profit.

Lion Air, Indonesia’s biggest private carrier, has ordered more than 460 planes in just 16 months, a dramatic expansion that has raised doubts about how it will find the financing, pilots and landing slots.

The airline is banned from the European Union and United States over safety concerns. But it says it plans to broaden its regional horizons, and observers think it wants to take on AirAsia.

It now operates 92 planes — all Boeings except for one older McDonnell Douglas — to 72 destinations, mostly in Indonesia. The furthest it flies is to Saudi Arabia, a route packed with domestic workers and construction labourers.

In a rare interview with The Star in Malaysia in late 2012, Lion Air’s rags-to-riches founder Rusdi Kirana said that Indonesians in the middle-income bracket were already flying to neighbouring Singapore and Malaysia.

“This group will later think of Hong Kong or even Canton (Guangzhou, in southern China). And when they have more money they will want to travel to Japan, Korea, north China or Australia,” he said.

Read Next
Letter from DNA discoverer to be auctioned in NYC
EDITORS' PICK
Smart powers Liga Adarna Season 4: Race to the Top
Pharmally scandal: Due diligence failure overshadows debate on law
Huawei’s relentless mission to bring ultimate health and wellness tracking for your fitness goals
Smart reaffirms 5G leadership as PH’s most reliable 5G mobile operator
Pharmally employee believes firm ‘swindled’ gov’t in delivery of face shields
Pangilinan worried missing Pharmally files may have been ‘cleaned’
MOST READ
Robredo ready for backlash if she drops out of presidential race
Carpio sees Sara Duterte-Bongbong Marcos tandem ‘in the end’
Bongbong parrots Duterte on West PH Sea: We don’t stand a chance vs China
Heartbroken but not giving up: Robredo still pushing for united opposition for 2022 polls
Don't miss out on the latest news and information.