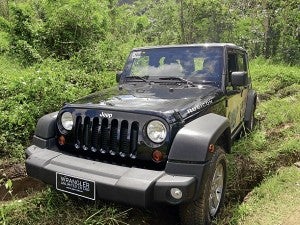 I WAS able to get out of the rut, with a couple of tries and ‘a call a friend’ option.

A few weeks ago I was invited by my friend Nenuka Guba, from Chrysler, to go off-roading. I paused and tried to contemplate if she was calling the right person. Although, people know me to be cowboy and up for anything (despite my husband’s violent reaction), there are things that just don’t mix with my “acquired taste” personality. And one of them is getting dirty.

I know it didn’t: I played football in college, went to climb Mt. Cristobal to automatically get a 1.0 grade without attending a semester of classes. Also, there’s the fact that most of my weekends are usually filled with dust, grease, and fumes from being a karting mom; after having kids you automatically get allergic to mud and getting dirty. Not only because you usually think dirt=germs=sick child=sleepless nights+a higher chance needing plastic surgery to remove your Balenciaga Giant City eyebags. It also tends to ruin an outfit.

Going back to the phone call, I realized she was serious. After my hubby’s further coaxing, I headed to the Chrysler showroom in Edsa with my Doc Marten-type boots, dressed for the occasion to go off-roading for the first time. It was just a small group that headed towards Tanay, Rizal, on board two Wrangler Rubicons and a Grand Cherokee Jeep. 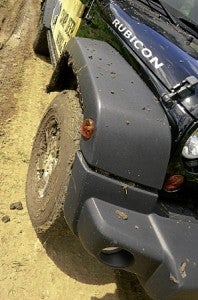 Of course being the first-timer (and not wanting to be shaken like a leaf), I volunteered to drive one of the Rubicons; we had to traverse some little towns, and when we got to the part where the road never met a politician’s pork barrel (for lack of voting population) I  asked our head instructor Beeboy Bargas if all his marbles were there that day, to make us drive these really bad roads.  He chuckled and said this was the best road on the route.

True enough, after putting the name of the lord in vain several times, which would warrant a few hours of penitence, I started getting used to the feeling that I was going to fall on one side and got the hang of off-roading.  They taught me how to use both the automatic and the manual transmissions, drive with buttons (such as traction control; hill descent control, electronic front sway bar disconnect, rear stabilizer bar) on and off, I thought, “Hey it’s quite easy. You just have to make sure you drive where the tracks are.”

More than the regular 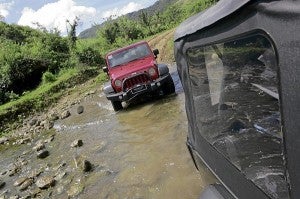 I WAS really impressed with how solid the Wrangler felt; it actually inspires you to head into the wilderness.

Until, of course, we got to this part where a dump truck was stuck from the previous day’s rain and we had to make our own tracks—where I got stuck.  Good thing Rubicon has 200 HP and 460 Nm (this is the torque dears, when you step on the gas it gives the forward surge—at this rate this is quite high; regular cars have only about 150-200 Nm). So I was able to get out of the rut, with a couple of tries and “a call a friend” option.

I was really impressed with how solid the Wrangler felt; it actually inspires you to head into the wilderness. Even though I seriously doubted my instructor’s and Chrysler Philippines’ sanity for allowing a newbie to drive into very hard-core terrain; such as river rock beds, with boulder-size rocks, (Okay, I’m exaggerating). The armor under chassis cover takes care of business down there.

I was also impressed with its ride, when I was driving fast (for off-roading) on the rocky terrain. You would expect to feel like a shaken cola bottle ready to explode. But thanks to its independent rear and front suspension with sway bar disconnect function—which lets each wheel adjust to the height of the terrain—it gives you a very comfortable ride. 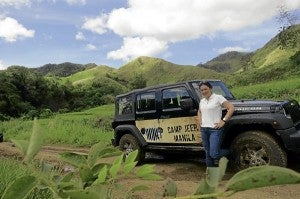 THE MUD, rock, water and the road do not matter, because the Wrangler Jeeps make you feel best dressed for whatever situation.

The Wrangler Rubicon comes in two variants: One with soft-top cover and the other with a hard cooler-like plastic top.  Both are quite adept in keeping you  cool, which is surprising especially with the soft top.  It is also quite helpful that the cloth seat covers are washable; I had to go out to take pictures, which got my boots muddy. So, no need to worry about your hubby having a coronary when you get dirt in the car.

After crossing a couple of mountains and submerging the car a dozen times in the river, we arrived back into civilization, the Camp Jeep Manila lounge area. Waiting for us was a feast of grilled meats and seafood with other Filipino dishes specially made by our head instructor’s mom.

Learning to drive off-road, testing the capabilities of the car and seeing the landscape was really quite an awesome experience—which Chrysler plans to share with its customers with the launch of Camp Jeep Manila later this year.

The mud, rock, water and the road do not matter, because the Wrangler Jeeps make you feel best dressed for whatever situation.