Driving the Porsche Cayman in Portugal 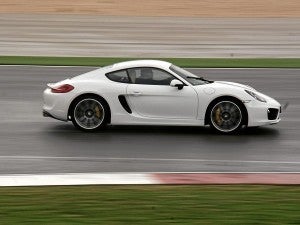 I CAN’T remember having my ego stroked so much by such a small, dainty car.

As soon as we touched down after a 20-plus hour plane trip to Portugal’s Algarve region, we were whisked off to the Porsche Center in nearby Faro, a 15-minute drive from the airport, and handed the keys to a Cayman with PDK. All the Cayman S units were spoken for, but I thought, a Porsche is a Porsche so the lack of power won’t matter. And indeed I was right.

Barely 20 minutes from getting in, I was attacking the narrow sweeping and blind corners of the hillside roads in Sport + mode, the tortured wail of Zuffenhausen’s finest flat six providing an intense soundtrack to the scenery. On the highway, I reached a terminal velocity of 250 kph many times before I had to tap the brakes lightly to make the turn. With no cops, and the 16 other Caymans zooming past me, it felt rude NOT to indulge in the speedfest.

On broken tarmacs slicing through the hilly regions of Algarve, the Cayman dons a different hat: It feels like a rally replica rather than a delicate sports car as it handles crests, bumps and ruts with ease. The power delivery is so linear that you could easily find the balance of applying the throttle, dabbing the brakes and adding in some steering lock as the Cayman literally flows through corners, both slow and ultra-fast.

The only thing that needs some time getting used to was the mid-engined layout: The Cayman stops so quickly and easily that I found myself losing  rhythm—applying too much brake before rounding out a corner. It seems that the Cayman prefers that I come in with a little TOO MUCH speed, and let the brilliant chassis and suspension sort out my corner entry and exit points. Flawlessly.

Invincible with the Cayman

I can’t remember having my ego stroked so much by such a small, dainty car. The 991 I drove in Santa Barbara two years ago was fantastic, but it was far slower because Smokey was always waiting on the next corner. In Portugal, the roads were very deserted, more so than in rural Germany where I’ve driven at stupid speeds countless times, but always mindful about the Polizei hiding around like Smokey in the United States. You can tell I’m pretty chuffed, tickled pink, grinning from ear to ear, and with my ego stoked to an all-new high, I thought that, with the Cayman, I was invincible. 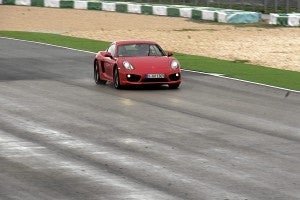 THE TRACK was literally a roller-coaster of a beast, with constant elevation changs.

All that changed the next day. After a restful sleep, a heavy continental breakfast and some good shots early in the bag, the clouds opened up and the rains started pouring like there was no tomorrow.

Arriving at Portimao Circuit, I could see that the elevation change was frankly astonishing. The track was literally a roller-coaster of a beast, with constant elevation changes and having a difference of at least 50 meters at some points. And it wasn’t a long, sloping incline, mind you—the inclines were so severe, it looked more like a 4WD test track than a high-speed circuit!

The only saving grace, I thought, was the 15-meter wide lanes at crucial overtaking areas, with wide run-offs.  But in the rain, none of that mattered.

After waiting an hour nervously and impatiently for the rain to stop and behind schedule by almost an hour, me and my Porsche instructor were let out. What followed was 15 minutes of both sheer terror and heavenly delight.

We were to go out on a convoy, with the instructor driving a 991 followed by four of us in our Cayman S. We were supposed to keep a tight convoy to really experience the car, see the proper racing line and get to feel the Porsche’s absolute abilities in acceleration, braking and cornering.

On the first lap alone, rounding out the third sweeper, I saw the lead instructor’s car ahead almost spinning out in the warm-up lap. A few corners later, I almost spun out as well.  But the section which really separated the men from the boys is the short uphill stretch behind the main paddock—which, to me, spans just over a hundred fifty meters but actually ascends almost four floors high, followed by an even more severe descent on a shorter straight and a 90-degree left turn going uphill. The men—that is, the professionals—take this crest flat out, with their cars usually taking off a few feet in the air, then braking hard, controlling oversteer and turning in left, letting the tail slide out a bit. 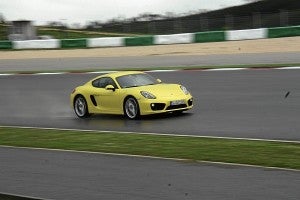 THE INCLINES were so severe, it looked more like a 4WD test track than a high-speed circuit.

I was petrified—I would brake right before the summit of the crest (safe street driver’s intuition, you always brake when you don’t see the view ahead of you such as approaching a crest) and since the front would unload while braking, control a bit of oversteer since the track was pretty much wet with lots of standing water, wetting my already wet pants even further.

After the 90-degree left turn, there was ANOTHER equally steep but shorter ascent with an even more severe descent, followed by an even TIGHTER 90-dgree right turn. Each time I’d clear this section, I would scream a primordial, animalistic scream of gratitude that I didn’t plaster myself and the Cayman S on the retaining concrete barrier. And I’d be far behind the group in the process. And this happened six times on a track 4.69 km long with 15 turns, many of the faster ones off-camber with loads of standing water.

The Cayman is truly amazing—saving my very red, very hot, very painful and very tense arse so many times. I did so many classic driving errors because I was simply overwhelmed by the condition, the speed and the sheer size and technicality of Portimao: braking under heavy cornering, running over the FIA regulation curbing which caused the Cayman S to lose even more stability and almost locking up the brakes a handful of times, not to mention almost spinning out in different sections of the track on every single lap.

The Cayman stayed true, reassuring me that is all is still well, and that we’ll make it through. It was the scariest, and at the same time, the most reassuring drive of my life. And I hope I can drive there again soon!