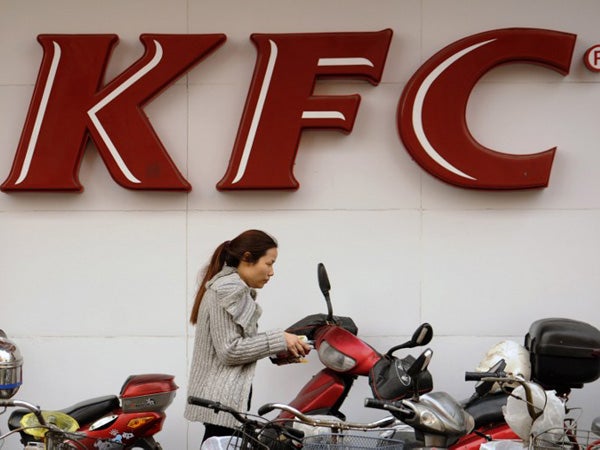 A woman passes by a Kentucky Fried Chicken (KFC) outlet in Shanghai on January 9, 2013. Chinese customers of KFC, the biggest fast food chain in the country, said they would still patronise it despite a government food safety investigation which has hit sales. US-based Yum! Brands Inc., whose portfolio includes KFC and Pizza Hut, said this week that sales in its key China market were forecast to fall more than expected in the fourth quarter in the wake of the probe into excess antibiotic levels in chickens. AFP /PETER PARKS

BEIJING – KFC launched a campaign Monday to rebuild its battered brand in China, promising tighter quality control after a scandal over misuse of drugs by its poultry suppliers.

The company, a unit of Yum Brands Inc., promised to test meat for banned drugs, strengthen oversight of farmers and encourage them to improve their technology. It said more than 1,000 small producers used by its 25 poultry suppliers have been eliminated from its network.

KFC is China’s biggest fast-food chain, with more than 4,000 outlets, but was hit hard when state television reported in December that some suppliers violated rules on the use of drugs to fatten chickens. The company estimates January sales plunged 37 percent.

“Starting now, we will stress strict management and the principle of zero tolerance in food safety,” Sam Sun, the chairman of Yum Restaurants China, said at a news conference. “We will immediately drop any supplier that lacks the determination or the ability to manage breeding well.”

The complaint against KFC was less serious than other product scandals in China over the past decade in which infants, hospital patients and others have been killed by phony or adulterated milk powder, drugs and other goods. But KFC’s high profile attracted attention, and its status as a foreign company with less political influence meant Chinese media could publicize its troubles more freely.

Yum, based in Louisville, Kentucky, said it expects sales in China to tumble by up to 25 percent in the current quarter. The company also owns Pizza Hut and Taco Bell.

CEO David Novak said earlier the company would need the “gift of time” for the controversy to die down. KFC has declined to say when it expects the business to fully recover.

The stakes are high for Yum. Even before the chicken scare, growth in China was slowing and fell into negative territory in October.

The locals started out copying global brands but are developing their own identity and the elusive skills to manage chains of hundreds of outlets and networks of far-flung suppliers.

One chain, Yonghe Dawang, copied KFC’s Colonel Sanders logo so closely with its image of a smiling, grandfatherly Chinese man that Western tourists did a double-take at its restaurants.

Zhen Gong Fu, which sells bowls of rice with beef, pork and other meat, has 479 restaurants nationwide. Other competitors include Master Kong Chef’s Table, with 100 outlets in 30 cities.

Executives note that Yum has bounced back from other troubles, such as an avian flu scare in 2005 that dragged down sales by as much as 40 percent.

The company says it plans to maintain its rapid pace of opening new restaurants in China.

Another 700 new sites are planned for this year, with Yum focusing more on cities outside Beijing, Shanghai, Guangzhou and Shenzhen where it sees greater potential for growth.