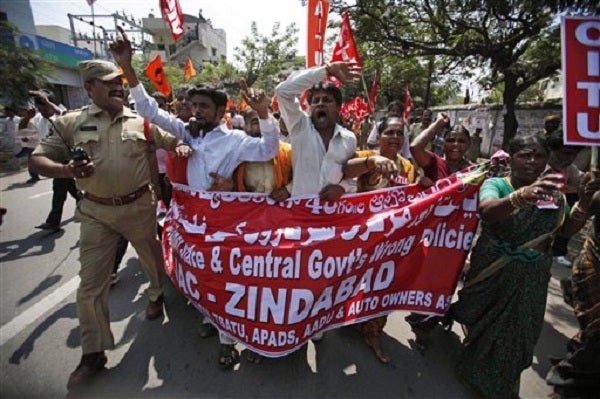 An Indian police officer, left, shouts as he tries to stop workers from marching toward the state legislature complex on the first day of a two-day strike in Hyderabad, India, Wednesday, Feb. 20, 2013, to protest rising prices and government policies to open the economy. Even with India’s economy growing at its slowest pace in a decade, average salaries in the country are projected to jump by more than 10 percent in 2013, a new survey forecast on Wednesday. AP/MAHESH KUMAR A.

NEW DELHI, India—Even with India’s economy growing at its slowest pace in a decade, average salaries in the country are projected to jump by more than 10 percent in 2013, a new survey forecast on Wednesday.

That is far below the blistering 15 percent wage growth pace set before the onset of the 2008 global financial crisis when India’s economy was expanding at near double digits.

But India leads in forecast salary rises across key Asia-Pacific nations with its projected average 10.3-percent increase the highest followed by China, where wages are seen growing by 9.3 percent, according to global staffing services company AonHewitt.

“Business sentiment is strengthening,” Sandeep Chaudhary, consultant at AonHewitt, told a news conference to announce the results of the survey of 518 Indian companies ranging from auto manufacturers to infrastructure firms.

A government statistics agency has forecast the economy will grow by 5.0 percent in the current financial year to March 2013, the weakest in a decade, though Finance Minister P. Chidambaram says he is confident he can steer expansion up to six-to-seven percent next year.

After India and China, the Philippines will post the next biggest wage rise of 7.2 percent this year, followed by Malaysia with 6.0 percent, Hong Kong with 4.8 percent, Singapore with 4.7 percent and Australia with 4.2 percent.

Japan is expected to give workers the lowest rise among Asia-Pacific nations of just 2.4 percent, the survey showed.

Salaries in the United States and in Britain are forecast to increase by around three percent in 2013, Chaudhary said.

Globally the highest pay rises will be in inflation-hit Venezuela and Argentina where increases are seen in the mid-20 percent range.

The divide in India between the highest and the lowest paid is still vast despite mounting public concern about a lack of equal distribution of the fruits of economic growth in the country where hundreds of millions of people still live in desperate poverty.

The highest-paid employees get 822 times more than the lowest-paid in India, Chaudhary said, compared with 625 times in the United States and around 550 times in China.

He attributed the wage disparities in India to low entry salaries and the need to pay large sums to attract key talent for top jobs.

The figures for India only reflect prospects for the seven percent of workers employed in the so-called “organized sector” such as government, state and privately owned firms, according to official data.

A massive 93 percent are employed in the unorganized sector working as pushcart vendors to servants.

Attrition rates, traditionally high in India especially in skilled areas where there is a war for talent, were 19.3 percent last year—broadly unchanged from the last few years.

“There is a constant struggle to retain talent” in sectors such as retail and information technology, said AonHewitt’s Chaudhary.