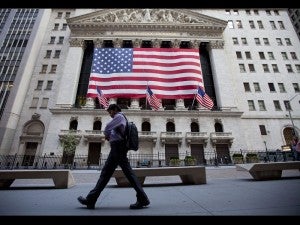 A pedestrian walks past the New York Stock Exchange on early Friday, Aug. 5, 2011 in New York. Stocks around the world tumbled Friday ahead of crucial U.S. jobs figures, continuing a losing streak reminiscent of the aftermath of the collapse of US investment bank Lehman Brothers in 2008. AP

NEW YORK—Gripped by fear of another recession, stock markets worldwide plunged on Thursday, with Wall Street suffering its worst day since the financial crisis.

Mounting worries over the eurozone debt crisis and a new batch of weak economic data from the United States did a one-two punch to hammer investor confidence, shaking investors on both sides of the Atlantic.

Wall Street saw its worst day in more than two years, with the Dow Jones Industrial Average ending down 4.3 percent, or 512.76 points—its worst one-day drop since December 2008—to close at 11,383.68, erasing all of its gains so far this year.

Intense selling this week reflected frustration with politicians to address pressing concerns over high public debt levels in Europe and the United States as large industrial economies show signs of running aground.

“There is a deep concern about global growth and of the state of play in the United States in particular,” said City Index analyst Giles Watts.

“Traders are growing increasingly concerned about a sharp slowdown in US economic activity in the third quarter,” he said.

Markets in Asia-Pacific were sucked into the frenzy when trading opened yesterday, with stock markets plunging across the region, with falls of more than 3.3 percent in Japan, South Korea and Singapore and more than 4 percent in Hong Kong, Australia, Taiwan and Indonesia.

The main market index in mainland China was 1.8 percent lower by late morning. The market in New Zealand slumped 2.8 percent and the main-share Philippine Stock Exchange gave up 1.4 percent. (See story on Page B1.)

Neither the Japanese central bank’s efforts on Thursday to dampen the rise of the yen nor the European Central Bank’s (ECB) move to buy bonds of some European countries served to reassure the markets.

Investors around the world dumped stocks and commodities  and rushed to the security of cash and government bonds, hammering equity indexes to their lowest levels of the year on fears of a spreading debt crisis and slowing growth.

Worries the eurozone debt crisis was spiraling out of control sent blue-chip European stocks to levels not seen since markets recovered from the financial crisis in mid-2009.

In Europe, investor sentiment remains plagued by worries that debt-laden Italy and Spain could be engulfed by the fast-moving eurozone debt crisis.

The ECB announced Thursday that it would resume emergency credit-easing measures, some of which were last enacted at the height of the global financial crisis.

But the ECB’s efforts still failed to restore confidence. The risk premium investors demand to buy Spanish 10-year bonds over safe-bet German debt shot back up to near a record high on Thursday.

The eurozone debt crisis has put Italy and Spain under huge pressure in recent weeks after Greece, Ireland and Portugal had to be bailed out by the European Union and the International Monetary Fund.

In the United States, data continued to point to a very weak economy, with some analysts citing fears of a new recession.

“The big catalyst was fear,” said Matt Rubin, director of investment strategy at Neuberger Berman in New York, which manages $199 billion in assets.

“People are selling in anticipation of a lousy jobs number and a double-dip recession,” he said, referring to Friday’s closely watched US payrolls report, which is expected to show another month of subpar growth in the labor market.

The US Labor Department reported on Thursday that weekly claims for unemployment benefits remained at a high 400,000 last week.

“Stocks have retreated deeper into the red to set a new 2011 low. The bleeding continues to be broad-based,” said Briefing.com.

“European banking stocks are under pressure as contagion fears work their way into Italy, the third largest economy in the eurozone,” it said.

Gold scored a new record at $1,681.72 per ounce on the spot market in New York as investors flocked to the precious metal, regarded as a safe bet in times of economic turmoil. It later retreated to $1,647.57.

Prices for US government bonds, another safe haven, also rose. The yield on the 10-year Treasury dropped to 2.46 percent from 2.60 percent late Wednesday, while that on the 30-year bond fell to 3.72 percent from 3.87 percent. (Bond prices and yields move in opposite directions.)

Oil prices in New York and London both fell more than five percent amid fears that a slowdown could take a deep bite out of global energy demand.

“The fear of a double-dip recession with the slowdown in the US and the sovereign debt situation in Europe is having everybody biting their nails,” said Adam Sieminski, chief energy economist of Deutsche Bank.

On forex markets, the dollar surged against other major currencies, helped by Japanese and Swiss government interventions to press their own currencies back down after the recent jump in risk-aversion.

But by the end of the day, the Swiss franc—the favorite safe haven of recent months—ended higher against the greenback: at 2100 GMT, one US dollar bought 0.7666 francs, compared to 0.7692 late Wednesday.