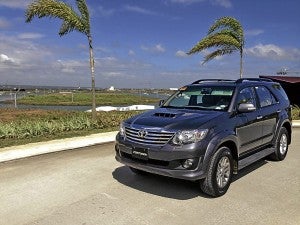 THE FORTUNER is a winner due to its flexibility minus that feeling of driving a delivery van.

My first test unit for the “Chicdriven test” was a Toyota Fortuner. My friend Pia Casequin, who I have handpicked as my cotester for the makeup test took the car to Westgate to drive to BF homes only to realize the parameters for the makeup test were wrong because of the heavy traffic and stoplights.  This was about two weeks before Christmas and I had to borrow it again at the end of January.

In both occasions that I was lent the Fortuner, it had to endure all sorts of persona changes enough to give it a major identity crisis. During our first stint with the car, I was the office purchaser of the Christmas raffle prizes, the family caterer, the household repairman, (I had a media Christmas party and needed to put my house in the best order) Yaya, mother, etc. On the second stint, since it was the beginning of the year, my racer-husband and six of his racing instructors were taken to the track with their bags, used to tow a stranded car and more. The car was also brought to a family wakeboarding gimmick. I would say the Fortuner was able to handle our entire requirement, well, without becoming bipolar.

The new Toyota Fortuner comes in both diesel and gas variants with prices starting at P1.381 million for a 2.5 G DSL MT  and P1.759 million for the 3.0 V DSL AT. The higher variants have the VNT technology that aims to improve fuel efficiency, but just being a diesel is already a plus factor. With one full tank of gas, it was able to travel from wherever it came from to Alabang, several trips to Makati, a trip to Rosario, Batangas, another to Carmona, Cavite, then to Nuvali in Sta Rosa.  Plus of course we had to do the makeup test, add several trips up and down Daang Hari road. So after an extensive Chicdriven test  below are the results for the Fortuner:

I give the Fortuner the rating of a Christmas Raffle.  The back of the Fortuner, fitted 5 rice cookers, 3 microwave ovens, a small washing machine, 4 desk fans and 3 stoves, 8 irons, 5 blenders, 2 coffeemakers, a vanity table, 100 anahaw bayong and a weeks’ worth of groceries. On other days, it handled five wakeboarders, two boards and five bulky life vests at the back. In terms of storage, I think the Fortuner is a winner due to its flexibility minus that feeling of driving a delivery van. 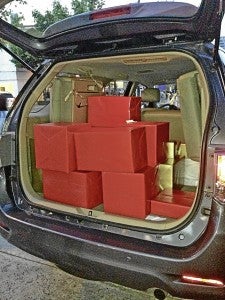 THE FORTUNER gives you what you are buying which is ‘value for money’ SUV.

The old Fortuner had a bad rep in terms of the ride. Toyota claims to have fixed this problem (can’t judge, never rode the old one).  For me the ride was OK and was actually comfortable for its price range. I wouldn’t mind taking it for long drives. During the makeup test, my cotester Pia timed a total of 25.50 minutes from scratch to night face which is just around the average for its class; it gets a rating of 3 out of 5 for the liquid eyeliner and 3 out 5 for the eyelashes test; both are doable but not if you are in a hurry because it will require several tries.

The Fortuner is a 7-seater SUV with two foldable seats at the back. The spacing is really impressive and with its high roof, no claustrophobic issues, (I have a big issue with riding in the back) since the seats are comfortable and you have enough legroom to maneuver. Even with one child seat, it easily fits a family of five plus one yaya and driver. The interior makes you feel a few notches above “you got a good deal.”  Definitely pro-RH Bill.

The Fortuner has its own distinct look, you won’t misidentify the car. Its design cues are very classic, that is why it appeals to a lot more people. The vehicle looks very tall and proud, which for me is a big factor specially if the vehicle is intended for family use; you feel secure and safe. The Fortuner gives the impression of buying function—it’s a solid candidate for people who just want a good, working SUV with a good resale value. The frills are just icing on top. 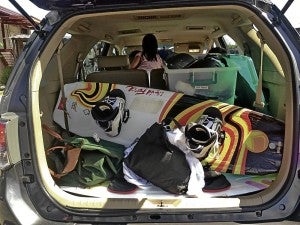 THE SPACING is really impressive.

I drove a 4X2 diesel AT which had a touch screen 6.5-inch digital LCD with built-in DVD player, capable of playing your iPods via Bluetooth or the trusty old aux jacks.  Also in this improved model was a GPS system with Point of Interest which is very handy for long drives. There is an aircon vent on the middle row with its own controls and a healthy number of cup holder. You can never have enough cup holders when you are housing a number of kids in the back.

1.    It is not pretentious; it gives you what you are buying which is ‘value for money’ SUV.

Things I am not so cool with the Fortuner

1.    No light with the vanity mirror

Duterte ready to try Russia vaccine, but he’s not qualified