A Valentine’s getaway with the Crosswind | Inquirer Business

A Valentine’s getaway with the Crosswind 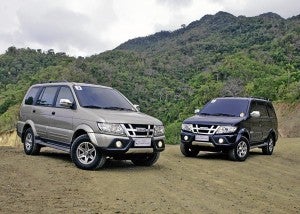 THE VENERABLE Isuzu Crosswind now features a few choice upgrades, soldiering on as one of the few remaining truly affordable, value-packed AUVs in the market.

Valentine’s Day is always special for Filipinos. Flower shops are overpriced yet still remain oversubscribed, vacation getaways are suddenly fully-booked, and nine months later, sometime in October/November, hospitals are full as well. A premonition of this is that hotels and motels in and around the entire country are full, tightly packed like sardines.

So you can imagine how difficult it is to find anything to do with your special loved one on Valentine’s Day. Thankfully, Isuzu Philippines came to the rescue with a special getaway event for couples of the motoring media, featuring a long drive down south to Laiya Batangas, via Lipa, to visit some historical landmarks. Our steed would be the venerable Isuzu Crosswind, now featuring a few choice upgrades, soldiering on as one of the few remaining truly affordable, value-packed AUVs in the market.

My wife had been teasing me that the Isuzu Crosswind is very much NOT for me, who loves cars low-slung, fast and furious. But I told her that I’ll drive almost anything (so long as it’s safe and reliable), anywhere, especially when there’s good food, good company, and crucially, great driving roads. The 2013 Isuzu Crosswind Sportivo now features projector-style headlamps for better, more focused nighttime illumination which improves visibility in incremental weather (and makes it a perfect candidate for HID/xenon headlamp upgrade), new-design 15-inch wheels with chunky 235/70R15 all-terrain tires, a stylish spare-tire cover on the rear tailgate, an aerodynamic shark-fin-style antenna for improved drag reduction, standard roof rails to which you can attach a cargo tray, auxiliary driving lamps or bubble cargo box to increase capacity, plus a 1DIN head-unit with an integrated backup 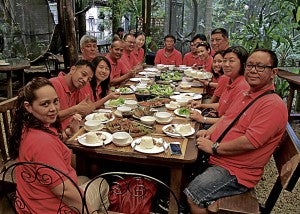 THE GROUP enjoying a hearty meal at Casa Rap in San Jose, Batangas

camera mounted on the standard spoiler, underneath the high-mount LED 3rd brake lamp, handy when moving out of tight spots in the province as we found ourselves in  many times. Power comes from a light-pressure, non-intercooled turbocharged version of the venerable 2.5-liter, 8-valve 4-cylinder diesel engine codenamed 4JA-1, and underneath is Isuzu’s Flex-Ride Suspension System, improving payload capacity, light offroad ability, and improved comfort and refinement on highway speeds and mountain road driving.

Our day started on Thursday, Valentine’s Day Feb. 14, with a meeting time of 7 a.m. at the new Crimson Hotel in Filinivest Corporate City in Alabang, Muntinlupa. The participants were briefed on the itinerary of our getaway and were  promised a pleasurable and leisurely drive. First stop was the Caltex Westgate in Alabang, where trip sponsor Caltex provided everyone with a P1,000 prepaid card, which we used to buy snacks and drinks for our trip.

Out on the highway, the Crosswind accelerated easily to 110-120 kph, easily nudging its manufacturer-claimed 135 kph top-speed. Seems low, but speed wasn’t the prerogative; rather a leisurely and relaxing drive in utmost comfort. The Crosswind’s seats were made for the average-sized Asian, so in the past I had always complained that it lacked support for long-legged, big-limbed drivers like me, but on this trip, after fiddling about, the seats were able to provide decent comfort to my frame, although they remain to be more lazy-boy recliners than proper bucket seats. But again, the focus was on comfort rather than outright performance. 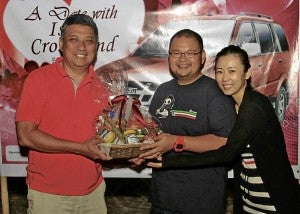 We reached STAR Toll, where the bumpy surface was easily smothered by the Flex-Ride Suspension, and reached our second stop, Casa Segunda in Lipa City. Lipa is a bustling, busy and growing city. A few years back, it was always free-flowing through Lipa on the way to Batangas Racing Circuit in Rosario, Batangas. Now, it is as jam-packed as Edsa during rush-hour traffic. That’s progress for you. But in the midst of all the hustle and bustle was Casa Segunda. It was the home of Segunda Katigbak, one of the prominent families in Batangas. Segunda was the classmate of Rizal’s sister, Olimpia at La Concordia College in Manila. She was 14, Rizal was 16, and it was love at first sight. But Rizal was timid in expressing his love for Segunda. When Segunda’s parents got wind of Rizal, they immediately sent for her back home in Batangas, and eventually married Manuel Luz, a distant relative of the Katigbaks and member of an equally prominent family in Batangas. It was a romance, which Rizal later said in his memoirs, doomed from the beginning.

From Casa Rap, we went to Acuatico Beach Resort in Laiya, San Juan, Batangas, about 90 minutes’ drive away. It was here where we were greeted by a challenging piece of winding 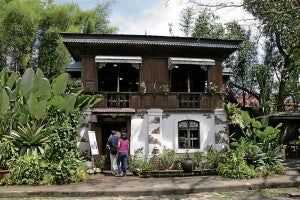 A TRIP down memory lane at Casa Segunda in Lipa, Batangas

two-lane road, with lots of fast, flowing corners, greenery on either side before it opens up to the beautiful sea. Our faithful steed, the Isuzu Crosswind lapped up all the curves and corners, and gave just enough grunt to keep our drive on the hairy side of exciting. Our Isuzu was loaded to the brim with four people and enough snacks to feed a small army, yet the suspension was surprisingly capable enough to keep things stable and secure.

Many upscale developments are currently ongoing, so it’s only a matter of time before this secluded hideaway becomes mainstream. Upon our arrival at Acuatico Resort, the beautiful split-level infinity pool beckoned our weary bodies. But a couple’s massage was first on the agenda. Simona Spa, Acuatico’s in-house spa features a soothing Swedish massage that helped me and the missus ease the pains of a long drive.

The highlight of our trip was a romantic candle-lit dinner by the beach, under the stars. Laiya was unusually cool and breezy this time of the year, which added to the ambiance. I was happy to get away from the hustle and bustle of Metro Manila’s monstrous traffic jams and gridlocked roads, while the missus was equally happy to get away from work and spend a perfect first Valentine’s Day together. 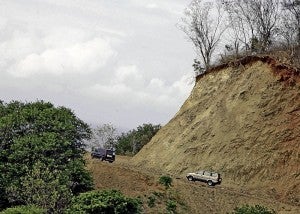 THE CROSSWIND had somehow charmed me …. earned my respect for its abilities, despite its modest underpinnings and specifications.

The next day, after a late-morning checkout at 10:30 a.m., we proceeded to our first stop of the day, in Sulyap Gallery Café and Restaurant in San Pablo, Laguna, which took the better part of 90 minutes’ worth of driving through the same challenging piece of road as we traced our steps going back, then headed further northeast into Laguna. Sulyap Gallery is a private display of antique collector Roy and Arthur’s collection, having started in 1985. Casa Sulyap Gallery was put up in 2006 to house and display these collections, which range from primitive wooden furniture and numerous santos (small statues of saints) made from wood and ivory. The main gallery building was formerly a school with a total floor area of 3,600 square meters. There’s also a quaint bed-and-breakfast in the same compound, owned by Sulyap Gallery called Casa Obando, which has two separate smaller old Filipino-themed buildings, one housing five small rooms, the other building being a purpose-built dining area where we were once again served sumptuous Filipino cuisine of the highest order.

After taking more pictures in and around the gallery, we proceeded for  our last quick stop to Calamba, Laguna to buy traditional Filipino delicacies such as buko pie, yema and silvanas, filling our already overloaded Isuzu with more food for take home. I also took the time to check out a plant nursery, but alas, we had almost no room left in our Crosswind. Another trip for another day.

Heading home, the Crosswind makes quick work of SLEx. We arrive safely in our home about 70 minutes after entering SLEx, braving the traffic of payday-weekend-infested Edsa, both me and the missus tired but happy and very satisfied. In our combined driving, the Isuzu had managed a best of 12 km/liter, not bad considering I was regularly pushing the engine to redline, practically fully laden at all times. The Crosswind was as dirty as could be, so I asked our helper to clean it thoroughly. The Crosswind had somehow charmed me, which had now earned my respect for its abilities, despite its modest underpinnings and specifications. It might not be the best, most precise or sharpest tool in your toolbox, but it is as effective and reliable as any of them. Here’s hoping for more road trips with the missus, good friends, and yes, with the Isuzu Crosswind!