American Airlines, US Air to form largest US carrier 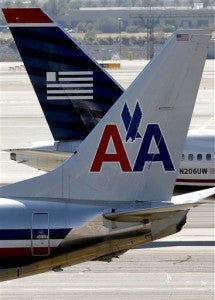 A US Airways jet passes an American Airlines jet, Thursday, Feb. 14, 2013, at Sky Harbor International Airport in Phoenix. The merger of the two airlines has given birth to a meg- airline with more passengers than any other in the world. AP PHOTO/MATT YORK

NEW YORK—American Airlines and US Airways announced a long-expected merger Thursday that would create the largest US airline, giving them more weight in an industry that has steadily consolidated in recent years.

The marriage would establish a huge carrier with more than 1,500 aircraft, able to compete head to head with powerful rivals United Airlines and Delta Air Lines.

It would also help lift American parent AMR Corp from bankruptcy reorganization, where it has been since November 2011.

Following American’s emergence from bankruptcy and the execution of the deal, US Airways will hold approximately 28 percent of the company, with American interests holding the rest, and the fleet will fly under the name American Airlines.

In a statement the companies valued the deal at $11 billion in “implied equity value” and predicted it would result in combined synergies of more than $1 billion.

Company officials characterized the deal as a winner for consumers by establishing a third US airline giant to compete with Delta and United. They expect to complete the merger in the third quarter.

But Standard & Poor’s raised doubts about how much greater competitiveness the combined company will have, and meanwhile a leading Washington think tank quickly condemned the merger as a bad deal for consumers.

“The combined airline will have the scale, breadth and capabilities to compete more effectively and profitably in the global marketplace,” said US Airways chief executive Doug Parker.

“Our combined network will provide a significantly more attractive offering to customers.”

The combined airline will offer more than 6,700 daily flights to 336 destinations in 56 countries, according to the companies.

It would assemble a powerful fleet of 1,511 mainline and regional aircraft. Combined revenues of $38.7 billion in 2012 would put them slightly ahead of United and Delta.

Company executives told AFP that “they’ll be some opportunities for rationalization” of management and headquarters staff.

But executives said the biggest savings came from combining routes and organizing planes efficiently so that the largest planes go to the busiest routes.

They also touted the combined company’s capacity to win back valuable corporate riders who were lured away by other airlines.

The companies also said the deal would strengthen the combined company’s competitive presence in the US Northeast, the western part of the US and Latin America.

Some observers have said the deal still leaves American with a relatively weak position in Europe and Asia compared with competitors.

The deal follows a spate of earlier US airline mergers that have reshaped the sector and improved profitability.

S&P cited “potential revenue synergies” from the deal, but said it believes the route network created by the merger is “not as strong” as those created by recent mergers executed by United and Delta.

Also, S&P warned there will “be likely higher labor costs from signing new contracts with unions to facilitate merging the airlines.”

“Previous big mergers resulted in higher fares and less service, and unfairly affected some regions of the nation more than others. It is troubling that an essential national service is now governed only by a handful of airline executives, who see themselves as accountable only to shareholders,” the foundation said.

Antitrust regulators and a US bankruptcy court must first give their approval before the merger can go forward, as American has been under bankruptcy protection since November 2011.

The idea of an American-US Airways tie-up has been floated since American’s bankruptcy filing.

Under the transaction, US Airways chief executive Parker will become CEO of the newly formed company, while American chief executive Tom Horton will serve as chairman of the board through the middle of 2014 before stepping down, sources familiar with the matter said.

“This looks like the end of a surprisingly successful round of US industry restructuring,” said Richard Aboulafia, an analyst with the Teal Group Corp.

Projections for 2013 show that the US airline industry in terms of absolute profit would be the healthiest worldwide, said John Thomas, airlines specialist at LEK Consulting.

Parker told CNBC that after the recent wave of mergers, “we’re pretty much done” with consolidation.

American has continued to operate under court supervision even as it sought to slash costs by renegotiating wage and benefit deals with its unions.

The two carriers said the merger enjoys the support of several leading unions from the two companies, including pilots associations and representatives of flight attendants.