business / Motoring
Motoring
ON THE ROAD

Another good year for the auto industry 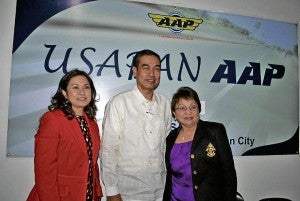 What a coincidence! Last Thursday morning, when the Automobile Association Philippines held its third Usapan AAP media forum where the topic was the outlook for the automotive industry in 2013, a newspaper (not the Inquirer) leaked the contents of the government’s new roadmap for the industry.

It so happened that one of the three Usapan AAP panelists that morning was Board of Investments (BOI) trade development group Executive Director Lucita P. Reyes. “What can I say?” she said and lamented that the premature release of information on the roadmap for the development of the auto industry might preempt the decision of the government and perhaps even President Aquino’s decision.

Usapan AAP had a powerhouse panel, what with the industry’s most influential leaders speaking up together with the BOI executive director at the head table: Chamber of Automotive Manufacturers of the Philippines Inc. (CAMPI) president Atty. Rommel Gutierrez and Association of Vehicle Importers and Distributors (AVID) president Ma. Fe Perez-Agudo.

Gutierrez is a vice president of Toyota Motor Philippines, Triple Crown (overall sales, passenger cars, light commercial vehicles) Champion for the last 11 years while Agudo is president and CEO of Hyundai Asia Resources Inc., the first Korean brand to gain the No. 3 spot among the top five car brands in the country.

OPTIMISM. Both Gutierrez and Agudo in their opening statements expressed optimism that 2013 will be another good year for the auto industry given the stable and growing Philippine economy. Gutierrez projected a 10-percent growth for the industry this year from the 185,000 vehicles sold in 2012.  Some CAMPI members plan to increase production to meet growing market demand, he said, adding that all CAMPI is asking for is consistent government policy.

Agudo was confident that Filipino consumer behavior will remain favorable this year as the hoped-for P2,400 per capita income may be within reach and exciting new models will be introduced on the market.  She noted that CAMPI posted 11-percent growth in 2012 while AVID registered 14-percent growth.  The top three car companies contributed the following amounts to the government last year in the form of taxes and duties paid: Toyota, P7 billion; Mitsubishi, P5.5 billion; and Hyundai, P4.8 billion.

When it was her turn to speak, the BOI executive director confirmed that the Department of Trade and Industry is preparing to intervene in the auto industry with a new policy to reverse the present ratio where 52 percent of the motor vehicles are imported CBUs (completely built up) while 48 percent are locally assembled from CKD (completely knocked down) packs. She said that if the government does not intervene, by 2030 only 9 percent will be CKD while 91 percent will be CBU.  This cannot be allowed since the local car manufacturing sector directly employs around 868,000 people.

MOTORIZATION. Reyes claimed that the DTI has always been supportive of the auto industry and has been working with the industry players for several years now.  The BOI is aiming for the country’s motorization level by 2016, so in July 2012 they met with the auto industry sector to find out how the government can help.  The BOI asked where the industry wanted to be not only next year, but up to 2030.

Reyes said that the BOI is consulting the various players and hopes to finalize the new auto industry program in two months, making sure that when the industry grows, the parts and components sector will also grow.   She admitted that it is difficult to compete with the other Asean countries because of a 14-percent production cost handicap.  Since the Philippine car market is so small, the manufacturers have to be competitive and find access to the Asean market in order to sell CKDs assembled here.

The BOI official admitted that we have very little supply base and that the importation of parts continues.  While some parts manufacturers are already exporting, not all the parts and components made here are used by the local assemblers.

REFLEET. To spur market demand, government offices could refleet their rolling stock and replace vehicles that are 10 years old or older with new ones, Reyes said, pointing out that some 1.7 million of the total 3.1 million vehicles registered with the Land Transportation Office are more than 10 years old.

She also mentioned granting incentives such as income tax holidays under the 2013 Investment Priorities Plan to auto assemblers that produce low-priced, fuel-efficient motor vehicles or use alternative fuel technology. Reducing or changing the excise taxes on motor vehicles to encourage investments is also being considered, but this would require a legislative measure approved by Congress.

Summing up, the third Usapan AAP was an informative and productive one, uniting the industry group leaders and the government in a coordinated effort to move the auto industry fast forward—even if that unity was only verbal and temporary.