‘Currency wars’ back on international agenda 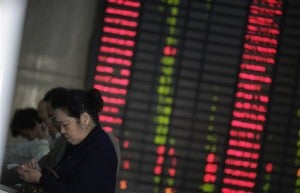 PARIS- The strength of the euro, the state of the global monetary system and controversy over a so-called “currency war” will dominate the economic stage at eurozone and G20 ministerial meetings this week.

The currency issue has been revived by Japan and is beginning to cause concern in some quarters in Europe.

France will raise the issue of the strengthening euro at a meeting of eurozone finance ministers on Monday. Then a meeting of G20 ministers is likely to focus on the big picture in Moscow on Friday and Saturday.

Eurozone finance ministers, meeting as the Eurogroup in Brussels on Monday, hold their first session under their new president Jeroen Dijsselbloem of the Netherlands, against a background of calmer conditions for their debt crisis.

Dijsselbloem has taken over from Jean-Claude Juncker of Luxembourg who chaired the meetings throughout the global financial crisis and then the eurozone debt turmoil.

This meeting is not expected to take any decisions either on help to debt-stricken Cyprus in the run-up to next week’s presidential election there; or on the creation of a banking union, still the subject of intense negotiations.

The main focus of discussion is likely to be the rise of the euro: French Finance Minister Pierre Moscovici called last week for a debate on the euro’s exchange rate.

France is worried that the strengthening euro makes eurozone exports look more expensive and could undermine government efforts to improve the competitive position of French industry and services. The Socialist administration is already grappling with weak growth and a big trade deficit.

France wants the eurozone to arm itself with a policy for the foreign exchange rate. The external value of the euro should not be left to market forces of the moment, French President Francois Hollande has argued.

Germany and the European Central Bank however, are keen to nip the debate in the bud, arguing that the European currency is not over-valued.

The ECB has statutory independence in managing monetary policy and its main obligation is to ensure price stability.

While the exchange rate is one of many factors affecting inflationary pressures, any targeting of an exchange rate would potentially interfere with the money supply and therefore monetary policy.

ECB president Mario Draghi was nevertheless cautious on Thursday about the strength of economic recovery in the eurozone. Many analysts saw his remarks as an attempt to talk down the rise of the euro.

If so, he succeeded: the euro was being quoted at $1.33 at the end of the week having risen a few days earlier to the highest level for 14 months and above $1.37.

The subject is expected to be on the agenda at the end of the week in Moscow, where finance ministers and central bankers from the leading rich and emerging economies, the Group of Twenty (G20), meet with a Russian as president for the first time.

With the economic recovery is struggling to gain momentum globally, Russia has set as the main target in the run-up to a G20 summit in Saint Petersburg on September 5 and 6, the search for new sources of growth.

Rich countries, forced to contain or reduce debt, are injecting huge amounts of money into their economies to support activity.

Leading central banks have used various levers to this end, notably the United States. The Japanese government has just convinced its central bank to go down this road in an attempt to arrest a deflationary spiral that has sapped its economy.

But this use of the monetary lever has had the effect of pushing down the yen. That may be a relief for Japanese industrialists, but it is a problem for countries such as Germany, one of the biggest exporting countries in the world.

For some analysts, the main is problem is a lack of coordinated decision-making, running against the spirit of the G20, which is intended to coordinate economic policies around the world.

The Japanese policy is also likely to worry South Korea: its currency, the won, has risen commensurately against the yen.

Tokyo’s move will also be of concern to countries in South America which have frequently criticised US monetary policy for the same reason. It was Brazil that launched the latest use of the term “currency war” in 2010.

This so-called war now goes beyond the concerns of emerging economies, analysts at ING Investment Management said, commenting that in recent weeks it seems to have reached the developed world.

The ECB is reluctant to create money to support the eurozone economy, and there are concerns that the eurozone could end up being isolated and pay a price in terms of growth.

Draghi warned that if policies elsewhere in the world did not reflect the consensus view of the G20, this fact would have to be discussed. His remarks came after France had called for “serene” debate.

And the president of the German central bank, Jens Weidmann, has said he is worried that there could now be a “race to devaluation”.