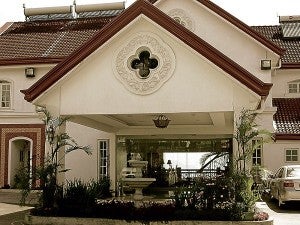 TAGAYTAY CITY—The most expensive item on the menu, Bistro Ibarra’s Paella Valenciana, was taking almost an hour to be served as hungry patrons started to complain about the wait.  Finally, the much-awaited dish arrived and it was wiped out in no time, with succeeding compliments to the chef.

Villa Ibarra reflects a laid back, unhurried atmosphere.  It has eight rooms ideal for family reunions, especially wedding occasions.  The company’s mission includes providing ladies (in particular) with a worry-free wedding as they operate like a one-stop shop.  For example, apart from offering food and a function room, they also provide photography, music, sounds, cakes, souvenirs and other amenities.

They also have a gazebo-like honeymoon suite with a panoramic view of Taal Lake.  Event and venue manager Maila Candano explains that most of their bookings are done online by overseas Filipino workers (OFW) who are enamored by the beautiful picture of the lake as well as the perceived intimate atmosphere at the inn. 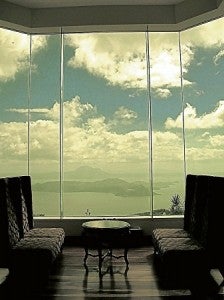 THE UNOBSTRUCTED view of Taal Lake has captured the imagination of OFWs returning home for a visit. Photo by Ma. Esther Salcedo-Posadas, Contributor

“Ibarra is a home away from your home,” she says.

The new bed-and-breakfast establishment was once a four-room family vacation house that was converted into an eight-suite hotel.  The rooms combined can accommodate anywhere from 16 to 40 persons at one time.  Functions can hold up to a maximum 200 guests.  It is the brainchild of businesswoman Jeanette Lim Macasieb and forms part of a group of companies that includes City Garden and Lotus Garden hotels in Manila, as well as other Ibarra restaurant venues.

Villa Ibarra is not a neophyte in the wedding and catering industry with other branches having started roughly a decade ago.  To cite, Ibarra’s Garden located along Padre Faura in Manila was an old house built in the 1920s with an American Art Deco design that brings out a nostalgic feel to the place.  The Tagaytay branch evokes a similar old world ambiance.  Likewise, the Lotus Garden Hotel (formerly Royal Palm Hotel) is situated along Mabini and Padre Faura streets, close to many historical sites in the city. 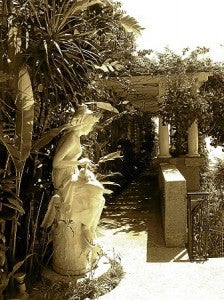 OLD world charm—this walkway leads to the open courtyard where many weddings have been celebrated. Photo by Ma. Esther Salcedo-Posadas, Contributor

Candano relates that she finds family reunions at Villa Ibarra most unforgettable.  She mentions how the staff would, at times, end up becoming part of the whole affair.  She remembered how they got involved during an incident when the bride’s wedding gown didn’t arrive and the family had to rent a dress.  Sometimes, a whole clan reserves all the eight rooms.  The place thus ends up becoming an occasion where lifelong family memories are made.

The hotel includes a bistro that serves international cuisine.  Candano cites the Paella Valenciana as their bestseller.  And if only to taste a morsel of that famed dish, Villa Ibarra may be worth a visit.