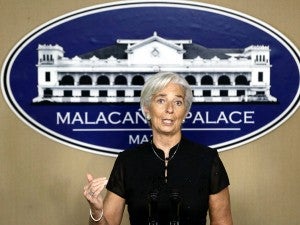 DAVOS, Switzerland—The crisis mood is gone, but that doesn’t mean you can slip back into your old ways—that’s the message from top international finance officials wrapping up the World Economic Forum here.

They warned governments on Saturday against letting their relief over an improved economic climate turn into complacency over reforms many want to see in order to sustain a still-uncertain recovery.

“Do not relax,” International Monetary Fund (IMF) Managing Director Christine Lagarde urged at a closing panel on the economic outlook.

She said the IMF outlook for a “fragile and timid” recovery depended on officials in the powerhouse economies of Europe, the United States and Japan making “the right decisions.”

Her comments came at the end of the gathering of 2,500 business, financial and political leaders that took place in a more upbeat atmosphere than last year.

Fears over the breakup of the euro currency union have abated, while the United States has avoided the so-called “fiscal cliff” of automatic tax increases and spending cuts that threatened to push the world’s largest economy back into recession.

With those bullets dodged, there are fears that governments may ease up on the measures to improve growth and reduce debt that many institutions such as the IMF are calling for.

The IMF estimates that the world economy will grow by 3.5 percent this year, modestly better than last year’s 3.2 percent. Yet the improvement is uneven. The eurozone and Japan are in recession, but the United States is growing, and emerging economies such as China are expanding much more quickly.

The developed world is still recovering from the shock of the financial crisis, which began in 2007 when US banks revealed heavy losses related to mortgages handed out to people with shaky credit.

With banks around the world teetering, the world economy slid into the deepest recession since World War II and the recovery since has been unspectacular.

Like last year, Europe and specifically the debt problems of the 17 European Union countries that use the euro, was a key focus in Davos.

Lagarde said officials in Europe would have to see through reforms to prevent failed banks from adding to government debt through bailouts. Progress toward a “banking union” that would impose tougher, centralized supervision of banks to ward off failures and bailouts has been slow.

Lagarde said the eurozone was still in “a very fragile situation” that was made more risky through a slow decision-making process and occasional backtracking on initiatives.

In addition, she said the United States had to sort out its budget dispute between Congress and President Barack Obama. Up against a New Year’s deadline, the two sides put off much of their dispute for a few months.

“Good decisions have been made,” she said. “Sometimes at the last minute, as in the United States, sometimes laborious and confusingly as in the eurozone,” she said. “In 2013 they have to keep up the momentum.

Angel Gurria, the secretary general of the Organization for Economic Cooperation and Development, echoed Lagarde, saying “let’s fight complacency with everything we’ve got, let’s continue with the reform process so we can consolidate this hesitant recovery.”

Akira Amari, Japan’s minister of economic and fiscal policy, underlined the determination of the newly elected government of Prime Minister Shenzo Abe to jolt the country’s economy out of its stagnation.

And the head of Canada’s central bank, Mark Carney, said the world’s major economies, so far supported by central bank stimulus such as low interest rates, needed to “achieve escape velocity” in which growth becomes self-sustaining.

Carney, who is due to become governor of the Bank of England in June, said the eurozone had been stabilized by an offer by the  European Central Bank (ECB) to buy government bonds of indebted countries and lower their borrowing costs.

Yet Carney said the ECB move was “crucial but not decisive” without progress on banking union and reforms to increase growth.

He said policy makers “have to finish the job they have started.” AP