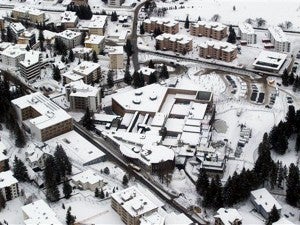 An aerial view of the Congress Center in Davos, Switzerland, Tuesday, Jan. 22, 2013. The world’s political and business elite gathered in the snow-covered resort of Davos on for the annual meeting of the World Economic Forum. AP PHOTO/MICHEL EULER

DAVOS, Switzerland—The world’s political and business elite gathered in the snow-covered resort of Davos on Wednesday, aiming to instil some confidence in the global economy amid tentative signs of recovery.

About 45 world leaders will rub shoulders with around 2,500 lobbyists, journalists, captains of industry and economists in the picture-postcard Swiss ski resort for the five-day annual meeting of the World Economic Forum (WEF).

The 2012 meeting was dominated by the euro crisis and fears Greece could be forced out of the eurozone, but this year’s gathering is marked by a feeling of cautious optimism that the worst may be over.

In one of the first sessions, JP Morgan Chase CEO Jamie Dimon said he felt the banking industry was beginning to turn the page on its difficult recent history.

“I think the industry has to come back from the past. I think a lot of companies are doing fine. Banks continue to expand and lend,” he said.

Opening the meeting, WEF founder and host Klaus Schwab, 74, called on delegates to turn the corner on the eurozone debt problems, which have tipped the region into a recession.

“My hope is that you come out of the meeting with a vision which goes beyond just crisis management as we have seen, a vision that is much more dynamic, not just crisis fighting,” Schwab said in his opening speech.

In a major survey released by financial services firm PricewaterhouseCoopers Tuesday on the eve of the meeting’s official opening, chief executives said they were marginally more optimistic about the global economy.

Only 28 percent of CEOs said they expected the world economy to decline further in 2013, against 48 percent last year, while 52 percent expected it to remain stable.

But only 36 percent said they were “very confident” in their companies’ growth prospects in the next 12 months, down from 40 percent last year and 48 percent in 2011.

Medvedev will be the first major figure to speak, making an address around noon on Wednesday on Russia’s economic outlook.

Other top speakers are European Central Bank President Mario Draghi, who will speak on “challenges for the years to come,” and the head of the International Monetary Fund, Christine Lagarde.

Every year events conspire to hijack the agenda and this year is no different, with the conflict in Mali and the crisis in Syria poised to exercise the minds of the global elite.

Jordan’s King Abdullah II was due to make a special address and the premiers of Egypt, Lebanon, Libya, Tunisia and the Palestinian Territories were scheduled to attend, as well as Israeli President Shimon Peres.

There is also a heavy African presence, with the leaders of South Africa and Nigeria attending a session on “de-risking” the continent on Wednesday.

Beside the leaders, more than 900 top business executives will attend, with this year’s forum co-chaired by the CEOs of Coca-Cola, Embraer, UBS, Dow Chemical and the head of anti-graft watchdog Transparency International.

Organizers have chosen the theme “resilient dynamism,” reflecting the need for an improvement in the structure of the global economy to resist sudden emergencies like the eurozone debt crisis.

Despite the presence of so many world leaders, no formal decisions are taken at Davos, although corporate deals are often sewn up on the sidelines and presidents and prime ministers huddle in small gatherings to thrash out pressing issues.

Among the 260 sessions spread over dozens of venues are also presentations on religion, science, media and health, including a dinner exploring possible cures for cancer and a session on “the past and future of the universe” by the head of top particle physics laboratory CERN.

The invitation-only meeting is also known for its informal luncheons and lavish cocktail parties, often hosted by corporate sponsors and with exclusive guest lists, where political and business leaders can rub shoulders and mingle.

Adding some Hollywood sparkle to the meeting before it officially got under way was actress Charlize Theron, who called on world leaders to do more to combat HIV/AIDS.