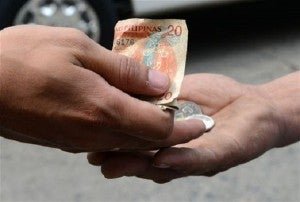 A benign inflation environment, together with record-low interest rates and a bullish stock market, has led the First Metro Investment Group to forecast a 7.5-8 percent economic expansion in 2013. AFP FILE PHOTO/JAY DIRECTO

MANILA, Philippines—The First Metro Investment Group sees 2013 to be another banner year for the Philippines, expecting the domestic economy to expand by 7.5-8 percent alongside a benign inflation environment, record-low interest rates and a bullish stock market.

The above-trend economic growth forecast for 2013 is seen supporting a 20-percent average growth in corporate earnings and, in turn, propelling the main-share Philippine Stock Exchange index toward 6,800 this year.

Heavy election spending, increased infrastructure projects, robust consumer and service sectors and stronger tourism and gaming are seen as supporting a gross domestic product (GDP) growth of above 7.5 percent in 2013, much higher than the country’s trend growth of below 5 percent prior to the last presidential elections in 2010.

“With a 7.1 percent increase in GDP in the third quarter of 2012, a lower-than-expected inflation rate of 3.2 percent, gross international reserves rising rapidly that have reached $84.1 billion and a debt-to-GDP ratio that has fallen below 50 percent, the Philippines is definitely now on the rise,” said FMIC chairman Francisco Sebastian.

“The economy is in an unprecedented growth momentum, supported by solid fundamentals,” he said.

Interest rates are anticipated to further ease due to lower inflation, a much-awaited upgrade to a sovereign investment grade rating, massive liquidity and limited supply of Philippine debt papers.

“As a result of robust economic growth, the government’s pungent anti-corruption stance that has improved tax administration and with new tax revenue sources, budget deficit will remain low and may not reach P200 billion or 1.5-1.6 percent of GDP,” said FMIC president Roberto Juanchito Dispo.

Economist Victor Abola of the University of Asia and the Pacific, FMIC’s partner in its monthly research publication, said public sector consolidation would be a necessary condition to the country’s take-off. “It’s a very important development that debt-to-GDP ratio falls below 50 percent this year and will progressively go down further. The debt-to-GDP ratio is below Malaysia’s and by the end of this year, will be below Thailand’s,” he said.

With this fiscal consolidation, Abola said that public infrastructure spending could go full-blast while private sector and consumer spending as well as investments would likewise turn robust.

“For an economy growing at a fast pace, all engines must be in high speed and we’re seeing both public and private sector doing that,” he said.