In search of rare metals, PH leaves no stone unturned 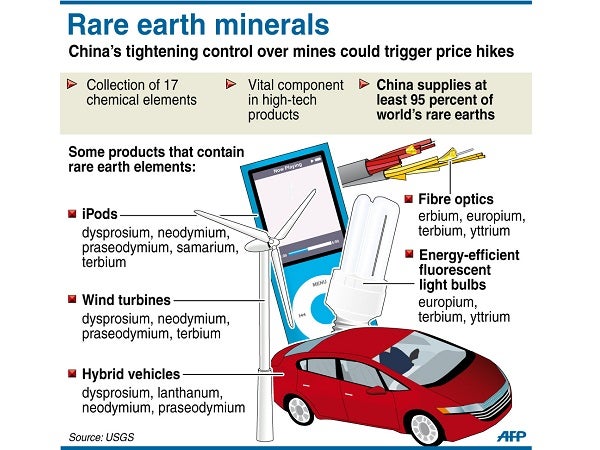 Graphic illustrating the use of rare earth metals, 95 percent of which are supplied by China. The Philippines is leaving no stone unturned in its quest for rare earth elements, a major component of electronic products. AFP

The Philippines is leaving no stone unturned in its quest for rare earth elements, or REE—a major component of electronic products.

The Mines and Geosciences Bureau (MGB) said the government had earmarked an initial budget for REE development work, with the exploration phase to begin sometime in the next three months.

“The budget of P500,000 is just for fieldwork this year,” MGB director Leo Jasareno said in a phone interview.

Additional resources would be allocated when an agreement has been signed with a technical partner. The Philippines is considering partnering with China.

The MGB has already found potential areas to explore, and these areas are also close to copper-gold mines. Palawan and Mindanao have been identified as the best places to start, but authorities have yet to determine if there are enough resources in those areas for commercial production, MGB said.

Last year, the country’s plan to produce REEs stalled after Beijing reneged on earlier commitments to help Manila despite several “reminders” by the MGB. This came amid a dispute between Manila and Beijing over the Panatag Shoal in the West Philippine Sea. Before the dispute, Manila and Beijing were set to sign a deal to jointly explore for rare earth elements.

Producing rare earth elements became a serious consideration for many countries last year when China decided to cap exports. At the time, the Chinese Commerce Ministry announced an initial cut of 27 percent in its exports quota for 2012, reportedly as part of a crackdown on illegal mining of rare earth oxides.

China controls 97 percent of REE supply globally and has been reducing its export quota to secure greater control over pricing, thus leading to a surge in prices over the past two years, according to observers.