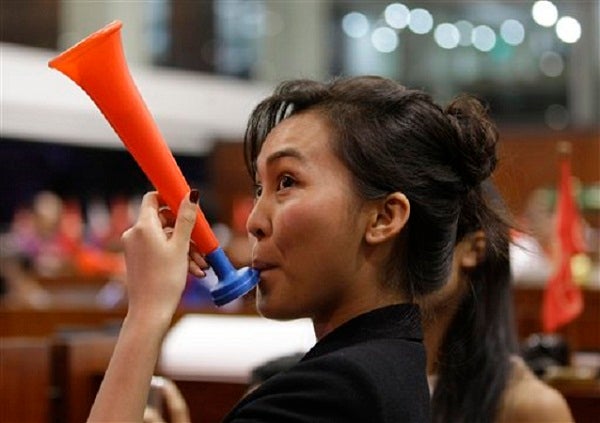 ONE OF THE BEST YEARS. A Filipino trader blows a horn during the last day of trading this year at the Philippine Stock Exchange in the financial district of Makati on Dec. 28, 2012. The year 2012 is claimed to be one of the best years ever for the Philippine economy, with the GDP expected to surpass 5 percent to 6 percent and the stock market ending the year on its 38th record high. AP/AARON FAVILA

The Aquino government has described 2012 as one of the best years ever for the Philippines with economic growth expected to surpass the targeted 5 to 6 percent and the stock market ending the year on a 38th record high, making it the second best performing market in Asia behind Thailand.

But 2013 promises to be even better, according to the CEOs of some of the country’s largest corporations who are already looking forward to even faster economic growth and the Philippines finally getting investment-grade status, which is expected to pave the way for more foreign investments to pour into the country.

“This year’s good economic fundamentals—benign inflation, high foreign exchange reserves and low interest rates—provide a good springboard for a rosy 2013 outlook. Hopefully, this translates into another credit rating improvement that would put the country to investment grade, something we haven’t seen in at least the last three decades. Having this upgrade could help change people’s perception outside the country on the Philippines as a place to put in their investments, which is the only economic indicator that we are not doing as well,” said Holcim Philippines CEO Ed Sahagun.

An equally optimistic Antonio Moncupa Jr., president and chief executive officer of EastWest Bank, noted that the “growth fairies seem to be favoring the country.”

“We made our plans for 2013 on the premise that the Philippine economy will do well. And we believe we stand on good foundation.  We hear, feel and see our loans-and-deposits customers on how well their businesses are doing. We expect the macro numbers—gross domestic product growth, loans-to-GDP ratio, the fiscal deficit, government revenue collections—to continue showing good numbers,” Moncupa said.

“Overall, we expect the momentum of domestic demand and the country’s good macroeconomic numbers to outweigh the uncertainties in Western economies. Given our positive economic outlook, we will proceed with our expansion programs,” he said.

According to Moncupa, the 2013 midterm elections should give the economy—which the government expects to grow by between 6 and 7 percent—an added boost as it will provide another opportunity to pump-prime the economy with increased expenditures.

Concepcion said 2013 would be a “super year” for the Philippines, partly because elections will help boost consumption. As a result, the stock market should hit even more records in 2013, he said.

Chakrabarti said the overall optimism of the population would result in increased investment and spending, by both companies and individuals.

“Confidence will continue to increase in 2013 and should be higher than 2012. The increased activities around the elections will further stimulate the economy in the first half,” said Chakrabarti, who also predicted that the beverage industry will grow at a faster rate in 2013 than has been seen over the past two years.

Riza Mantaring, CEO of Sun Life Financial Phil., gave a similarly rosy projection for the Philippines in 2013, saying that the economy would continue to “grow strongly” because of strong domestic consumption.

“It is already the third largest of the $1 trillion-plus Asean consumer market, and we expect to continue to move up as we have a young and still growing population with growing purchasing power,” she said.

San Miguel Corp. president Ramon Ang said the economy will continue to become strong mainly because “investors believe in our President and his good image.”

The Philippine Chamber of Commerce and Industry (PCCI), the largest umbrella organization of more than 30,000 enterprises in the country, also projected a stronger Philippine economy in 2013 because of two significant events in 2013—the midterm elections next May and the start of the second term of US President Barack Obama in January.

“The Philippine economy in 2012 has shown resiliency and strength amid the economic crisis in Europe and territorial disputes in the region. This is mainly due to our government’s effective fiscal management policies which created a stronger-than-expected investors’ interest in the Philippines,” said PCCI president Miguel Varela.

The PCCI stressed the need to fine-tune policies to support programs that will revive a weakening industrial sector. It urged the government to carry out more support in terms of infrastructure, incentives and market linkages in the agriculture sector. It also pushed for the implementation of various public-private partnership(PPP) projects, which are supposed to anchor government and private sector cooperation in important development programs.

Overall, the PCCI sees brighter prospects in 2013 in the face of the continuing interest of fund managers and investors alike in the Philippines.

“Given the significant milestones we have achieved in assisting potential investors in the country and if we are to base on the various delegations and missions we received or organized this year, coming from countries like India, China, Russia, Bahrain, Turkey, Taiwan, Korea, Japan, among others, we definitely see a string of investment interest and opportunities in the country.  Our assessment is that the economy is headed toward the right direction,” it said.

“Our country needs infrastructure investments that will support businesses and improve lives. If the government can fast-track PPP projects next year, then we may see an even more vibrant Philippine economy in 2013. We are already on the right path. We just have to stay on track and move faster so more Filipinos can experience firsthand what progress feels like,” said Vargas, adding that 2013 marks the start of its “expansion era” for Maynilad.

“Additionally, while the daang matuwid (straight path) strategy of the government has been successful in curbing graft and corruption in the bureaucracy, there is a need to further strengthen the implementation of this strategy. Otherwise, the gains achieved in the last few years could be undermined or negated,” Vargas stressed.

“The national economy is poised to repeat its growth but to sustain that growth, the country needs more foreign direct investments and infrastructure spending,” he said.

Mantaring said there were external factors to watch out for as these could derail growth in 2013.

“In terms of risk, a growing economy usually attracts inflation, but we feel the government has put in place enough measures to mitigate this risk at the moment. An abrupt appreciation of the peso is also a threat to the business process outsourcing sector as it lessens its competitiveness.

“External threats such as the US fiscal cliff, the lingering euro debt crisis and an economic slowdown in China can also negatively impact our economy, particularly the export sector,” she said.

However, Mantaring expects that the Philippines, Thailand and Indonesia would not be as affected by a global economic slowdown as their economies are consumption-led. The expected increase in government spending will also help support growth, she said.