Lessons from his grandparents 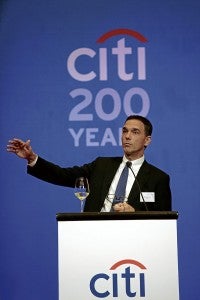 Michael Zink, head of Citibank for Asean and Singapore country officer, laughs as he catches himself quoting yet again his grandparents. “May be I should write a book—“What I Learned from My Grandparents.”

Indeed, when it came to the subject of financial literacy, Zink, who has a Master in Business Administration degree from the Kellogg School of Management at Northwestern University in Illinois, United States, seems to have learned most of the basics of prudent money management from his grandparents before he read his first business textbook and got acquainted with well-known financial experts.

Zink was in the Philippines recently for the two-day Citi-Financial Times Financial Education Summit 2012 that discussed how to make both young and old more money savvy and ways to enhance their knowledge and capability on financial matters.

The Citibank officer points out that, while the world is seeing growing affluence, some 2.5 billion people, roughly a third of the seven billion total population, are not in the banking system. Asia, the most populous continent, is home to 1.5 billion of these people.

“More and more people in Asia are affluent, becoming middle class and dealing with (financial) issues,” Zink says. “We have to educate people to act responsibly.”

Zink adds one of the things he learned from his grandparents is “common sense is not so common.”

Good husbanding of resources, particularly money, is supposed to be one of the things elders teach their kids. But with modern families increasingly fragmented (in Asia, overseas employment has left children without parents and/or grandparents), who will and can impart valuable wisdom on money matters so people do not “invest” hard-earned cash in alleged pyramiding scams like Aman Futures, Rasuman and  several others that came to light recently?  And what if the elders themselves do not know any better?

Besides, the suspected pyramiding and Ponzi scams drew adult investors who were not exactly uneducated. They were teachers, policemen, soldiers, businessmen, even local government officials.

Zink says this was why “(government) regulators are telling banks they have a responsibility to make sure clients know what they are buying. (Banks) have to know if clients understand what they are ‘buying’ (in terms of services and products).

“One of the ‘unfortunate things’ resulting from the financial crisis is that people think that debt is bad and that’s unfortunate because debt, if thoughtfully used, can be helpful. (For instance, if there is no) mortgage, most people will not be able to build a house if they just rely on savings.

“(People take on) debt without understanding the consequences. Young people do not see the consequences (of using a credit card), only the benefits so banks have to help them understand that a card is a handy tool if used wisely.” 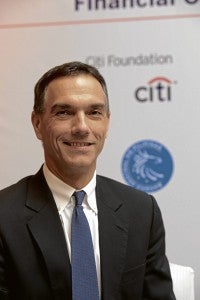 As for those who fall for get-rich-quick or high-and-quick-return-on-investment schemes, the Citi banker points out that it was “not necessarily greed that drives them but needs, so when somebody makes an attractive offer they will consider it.” People need things to make life easier for them and their loved ones.

Zink also admits that banks, which traditionally seemed imposing and intimidating to ordinary people, have to “soften” its image and find ways to make access easier so people will turn to them and not be easily conned.

But Zink stresses financial education was not a one-person or one-sector act. Various groups have to be involved in educating people on financial matters, he says.

The 200 or so delegates from about 30 countries who came to Manila for the financial education summit were sharing best practices on how to teach financial literacy and how to bring the information to more people.

“The world is changing quickly, (it is) very dynamic so (we) have to set benchmarks,” Zink says. He cites an observation that more data were being generated now in one day than in the whole 2002.

If affluence was creating new problems, the evolution of technology was also “shifting challenges”, he says. The generational divide, he adds, is resulting in a situation where the young are teaching their elders. “Adults have to keep up with digitally savvy kids,” he notes.

The banker points out, however, that while information is ubiquitous, “wisdom is still rare. We have to learn to cut through this ocean of data, have to distinguish what is useful, have to understand where kids get their information” and what information could be shared.

He says, in today’s world, there are bad guys out there stealing information. “Criminals don’t need guns to steal, information is floating out there,” Zink stresses.

Nobody really knows who is actually seeing the stuff shared on Facebook, he adds, so people have to be informed.

He says part of a banker’s job is to protect people’s personal data, but it is a shared responsibility of regulators, community, banks and other stakeholders.

He mentions “a great program to teach teachers (how to teach financial literacy)” in Singapore because “discussions that used to happen around the dinner table do not happen anymore. (We) have to find a way in into that conversation.”

Citing another lesson from his grandparents, Zink sums up the plain and simple message of financial education as “living within one’s means.”

Although most of the people Citibank’s financial education program was trying to reach were not its clients—at least not yet, Zink says Citi had always adapted to a changing world. “Citi is 200 years old. (It has) survived because it recognizes the world is changing and (there is a) need to shift. It is a matter of knowing when it is time to shift because of the change.”