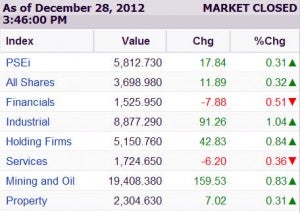 MANILA, Philippines — Philippine stocks soared to greater heights for the fourth straight year in 2012, rising by about 33 percent for the year on favorable local macroeconomic and corporate performance and ahead of the government’s attainment of a much-coveted investment grade rating.

“Market ended the year way above our expectations. We closed today with a loud bang. It’s a vote of confidence of investors for market’s sustained performance next year,” said Astro del Castillo, managing director at investment management firm First Grade.

“No doubt that we will continue to hear a lot of fireworks for 2013,” Del Castillo added.

While the performance during the last trading session for 2012 was aided by window-dressing, the stock market has been performing well for most of the year.   In fact, the index has been on an upswing since 2009, coming out of the Wall Street-epicentered global financial crisis in the previous year.

Elsewhere across the region, stock markets were mostly higher on hopes that the US would strike a last-minute budget deal to avoid a fiscal cliff – a series of tax increases and drastic spending cuts feared to push the US economy back into a recession in 2013.

At the local market, value turnover for the day amounted to P7.87 billion, buoyed by yearend window-dressing.  There were 101 advancers versus 83 decliners while 35 stocks were unchanged.